US warns Pacific islands of struggle against coercive regimes 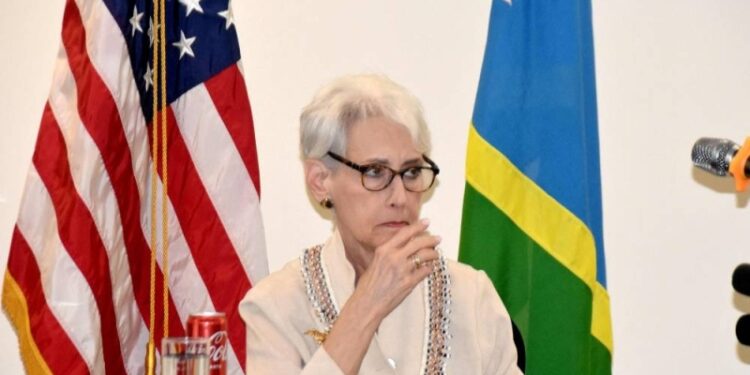 HONIARA — A top US diplomat warned Pacific Islands of a new struggle against violent power-hungry regimes today, as she visited the Solomon Islands to mark the 80th anniversary of World War II’s Battle of Guadalcanal.

With China’s military conducting drills around Taiwan and Russia bombarding Ukraine, Deputy Secretary of State Wendy Sherman hit out at a new crop of world leaders reviving “bankrupt” ideas about the use of force—without mentioning any countries.

Attending a dawn memorial service in the Solomon Islands, Sherman said “some around the world” had forgotten the cost of war, or were ignoring the lessons of the past.

She hit out at “leaders who believe that coercion, pressure, and violence are tools to be used with impunity”, but did not specify any names during her speech at the service.

The battle of Guadalcanal was a turning point in World War II.

The brutal seven-month land, sea and air fight between Allied and Japanese forces killed tens of thousands of troops—most Japanese.

Painting the situation today as carrying faint echoes of the fight against Nazi Germany and Imperial Japan in the 1930-40s, the State Department number two urged the region to push back.

“We remember how bankrupt, how empty, such views were then, and remain today,” she said.

“Today we are once again engaged in a different kind of struggle—a struggle that will go on for some time to come.” Sherman’s trip comes as the United States tries to rebuild diplomatic relations in the Pacific, where China is growing stronger and democratic alliances have faltered.

Sherman, again without mentioning names, told her hosts: “It is up to us to decide if we want to continue having societies where people are free to speak their minds.” It is time, she said, to decide “if we want to have governments that are transparent and accountable to their people”.

Sogavare was slated to attend the ceremony, appearing on the event programme, but was a no-show.

He did, however, meet Sherman later, for what she described as “wide-ranging” talks.

As well as warnings, Sherman said Washington wants to increase cooperation with the “absolutely critical” Pacific island nations, including by opening embassies in Tonga, Kiribati, and the Solomon Islands.

As part of the charm offensive, US President Joe Biden is also expected to invite Pacific Island leaders to the White House for a September summit.

Solomon Islands police and security minister Anthony Veke welcomed what he termed US “re-engagement” with the country and the region.

But he called on Washington to launch a “scaled-up effort” to remove unexploded WWII ordnance that continues to injure and kill Solomon Islanders to this day.