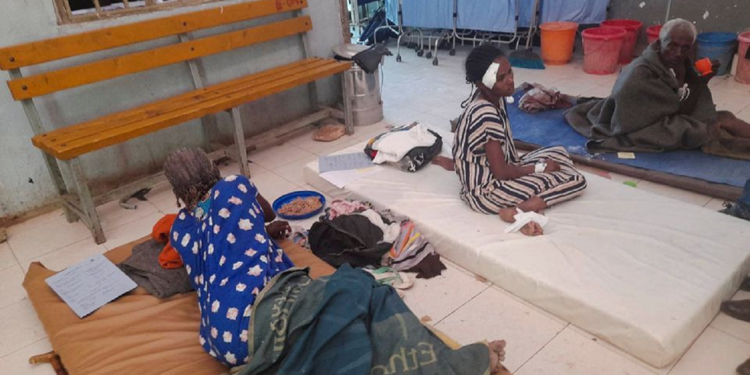 Survivors of an air strike by Ethiopian government forces receive treatment at the Shire Shul General hospital in the town of Dedebit, northern region of Tigray, Ethiopia on January 8, 2022.

GENEVA – The UN human rights office (OHCHR) on Friday expressed alarm at “multiple, deeply disturbing reports” of air strikes in the Tigray region of Ethiopia, saying at least 108 civilians had been killed since the start of January.

Liz Throssell, an OHCHR spokesperson, described numerous attacks, including on a private minibus, an airport and a camp for displaced people, saying that at least 59 people died in the camp strike, making it the most lethal one.

“At least 108 civilians have reportedly been killed and 75 others injured since the year began as a result of air strikes allegedly carried out by the Ethiopian air force,” Throssell told Geneva-based journalists according to Reuters.

She called on Ethiopian authorities and their allies to ensure the protection of civilians in line with international law which requires verification that targets are military.

“Failure to respect the principles of distinction and proportionality could amount to war crimes,” she said.

Ethiopia’s military spokesperson Colonel Getnet Adane and government spokesperson Legesse Tulu did not immediately respond to a request for comment on the alleged strikes.

A UN World Food Programme official warned at the same briefing that its operations in northern Ethiopia “are about to grind to a halt” because of intense fighting nearby.

“With no food, no fuel, no access, we are on the edge of a major humanitarian disaster,” said the WFP’s Thomson Phiri.