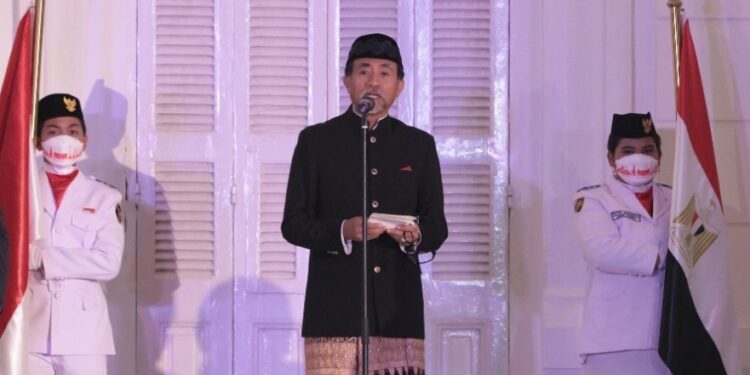 Indonesia and Egypt are currently playing important roles in an international arena. Indonesia holds the presidency of the Group G20 and Egypt is president of the COP27. Strengthened by the belief in ‘Recover Together, Recover Stronger’, the governments of both countries have also been successful in confronting the coronavirus pandemic.

These statements by Indonesian Ambassador Lutfi Rauf came during a celebration Wednesday night to mark the 77th anniversary of the country’s independence and the 75th anniversary of diplomatic relations between Indonesia and Egypt, which were formally established with the signing of a friendship treaty on 10 June 1947.

“The two countries are faced with the food and energy crises at the same time,” Rauf added.

“Seventy-five years of relations between Indonesia and Egypt lends a historical impetus to increase the popular role of both countries in order to continue building a comprehensive partnership,” the envoy said.

Diplomats, officials from Egyptian ministries and institutions, academics, politicians, businessmen and media people attended the event, the first after the two-year hiatus due to the Covid pandemic.

Also on display were different types of woven fabrics from all over the Indonesian archipelago, highlighting its diversity and cultural richness.

The event also featured art performances and traditional music performed by Indonesian students in Egypt and Egyptian youth studying at the Indonesian Cultural Centre in Cairo.