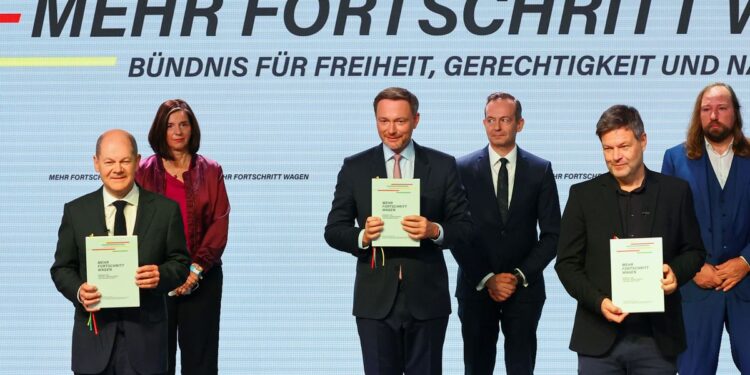 Designated German Chancellor Olaf Scholz of the Social Democratic Party (SPD); Robert Habeck, Anton Hofreiter and Katrin Goering-Eckardt of Germany's Green Party; and Christian Lindner and Volker Wissing of the Free Democratic Party (FDP) stand on stage during the signing ceremony of a coalition government agreement at the "Futurium - the house of futures" museum in Berlin, Germany, December 7, 2021.

BERLIN  — Germany’s incoming governing parties signed their agreement for what they portray as a progressive coalition on Tuesday, a day before Olaf Scholz is due to succeed longtime leader Angela Merkel as chancellor.

The agreement hammered out last month between Scholz’s centre-left Social Democrats, the environmentalist Greens and the pro-business Free Democrats received strong backing over recent days from the three parties’ members. That has cleared the way for Scholz to be elected on Wednesday in parliament, where the coalition — which has never yet been tried in a national government — has a solid majority.

Efforts to curb climate change are a top priority for the new government, particularly the Greens. Other priorities include modernising Europe’s biggest economy and introducing more liberal social policies. Above all, though, the government faces the immediate task of pushing down near-record coronavirus infection rates.

“We said that we want to venture more progress, and from this week on we want to work on progress,” said Christian Lindner, the incoming finance minister and the Free Democrats’ leader. “We have no illusions — we face great challenges.”

The agreement between three parties that had significant differences before Germany’s September election was reached relatively quickly and, at least in public, in unexpected harmony.

“If the good cooperation that worked while we were forming the government continues to work, it will be a very, very good time for the tasks that lie ahead of us,” Scholz said. He acknowledged that dealing with the pandemic “will demand all our strength and energy.”

Greens co-leader and incoming foreign minister Annalena Baerbock said the coalition agreement “reflects the diversity in our country” and that diversity will be the government’s guiding principle in the years to come, dpa reported.

FDP head Christian Lindner, who is set to become Germany’s next finance minister, said that the new government knows “we face great challenges.”

“We said that we want to make more progress, and from this week on we want to work on progress,” Lindner said at the signing ceremony.

With the coalition agreement now officially signed, the next German government is ready to get sworn-in and get to work this week.

Scholz is due to be inaugurated as chancellor on Wednesday, following a vote in the lower house of the German parliament, the Bundestag.

The rest of his cabinet is also due to be sworn in on the same day.

With Scholz’s swearing-in, outgoing Chancellor Angela Merkel’s time in office will officially end after 16 years in office. Her center-right Christian Democrats (CDU) will also go into the opposition in parliament.