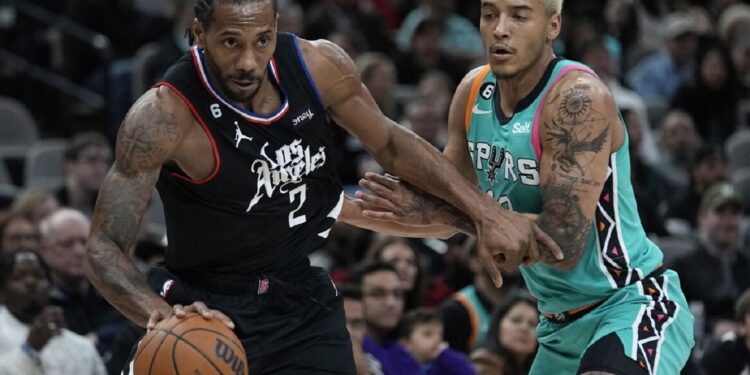 PHOENIX — Ish Wainright’s athletic career is back on the basketball court, as he used his surprising skill set to help the short-handed Phoenix Suns win their second straight game by beating the Indiana Pacers 112-107.

“Obviously, you need talent in this league,” Phoenix Suns coach Monty Williams said according to AP. “But playing hard, with talent, it’s a great combination.”

Josh Okogie led the Suns with 24 points and 10 rebounds while Mikal Bridges added 22 points, but it was a couple clutch plays from Wainright during the final possessions iced it.

Kawhi Leonard, meanwhile, scored a season-high 36 points against his former team, and the Los Angeles Clippers snapped a two-game skid by beating the San Antonio Spurs 131-126.

The Clippers had lost nine of 11, but coach Tyronn Lue believed this game could mark the start of a turnaround for his team.

“I felt it this morning,” Lue said according to AP. “I think having our guys back and everyone going back to their natural roles helps us out a lot. With Kawhi and PG (Paul George) on the floor, we play at a high level.”

The Clippers had seven players score in double figures, including Norman Powell with 26 points and George had 16 points and 12 assists.

Los Angeles shot 63 per cent from the field, 54 per cent on 3-pointers and had 31 assists.

Keldon Johnson had 23 points for San Antonio, which has lost nine of 11. Josh Richardson added 17 points, Zach Collins had a season-high 17 and Jeremy Sochan had 16.

Leonard and George played together for just the third time in January. Leonard put on a show on the court where he won NBA Finals MVP in 2014 with the Spurs.

The 6-foot-7 forward was 13 for 18 from the field and 4 for 5 on 3-pointers while adding seven assists, four rebounds and two steals.

“He was great,” San Antonio coach Gregg Popovich said. “He´s one of the finest players in the league. We are talking about the very top of the list – he´s with those guys.”

Leonard scored 13 points in just under 3 1/2 minutes starting midway through the third quarter to give the Clippers a 93-90 lead. Leonard had three 3-pointers and a vicious left-handed dunk in the run.

San Antonio did not have an individual answer for Leonard but responded by shooting 57% from the field and 54% on 3-pointers to go along with 34 assists.

“We won this game tonight because we made shots,” Leonard said. “They shot 57 per cent and we shot 63. We definitely have to get better. We´re not going to shoot 63 per cent every night. We´ve got to make sure their percentages are a lot lower than that. We still need to improve. We´ve got a lot to improve on if we want to be a great team.”