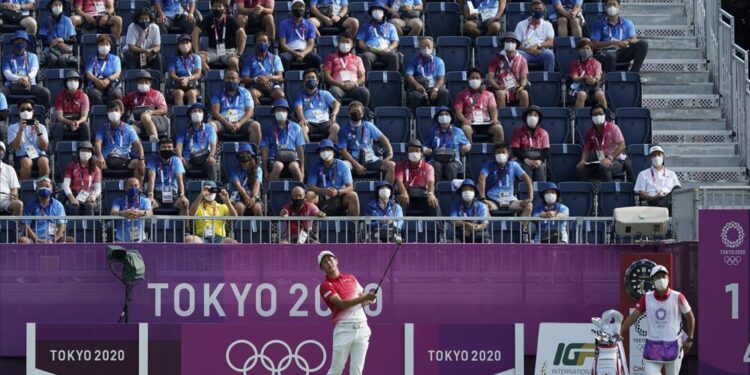 KAWAGOE, Japan  — Rikuya Hoshino did not have the first tee to himself Thursday for the start of Olympic golf.

The grandstand behind him, normally empty like at so many other venues at the spectator-less Games, was filled with volunteers in their Tokyo2020 shirts wanting to see the 25-year-old from Japan with the honor of hitting the first shot in the pandemic-delayed Olympics.

The other two players with him in the first group, Sepp Straka of Austria and Thomas Pieters of Belgium, took it from there.

Straka picked a good day to be dialed in with his irons in soft and still conditions. He made four birdies in his last six holes for an 8-under 63 to tie an Olympic record — not all that historical considering golf returned only in 2016 — for a one-shot lead over Jazz Janewattananond of Thailand.

Pieters, who finished one spot out of a bronze medal in Rio de Janeiro five years ago, was sick Wednesday and saw the front nine at Kasumigaseki Country Club only during practice rounds. He shot 30 on the back nine for a 65.

“I kind of didn’t expect this today,” Pieters said. “I felt horrible this morning even when I woke up, so maybe it’s just because I wasn’t thinking about bad shots or places not to hit it. My caddie told me, ‘Hit it there,’ and I did. I kept it simple.”

Carlos Ortiz of Mexico also had a 65 in ideal scoring conditions on a course so pristine it didn’t have a divot when players first began arriving because it was closed for two months.

The volunteers had emptied the stands after Hoshino’s drive to go to work — most of them stationed to help look for errant shots — when the biggest attraction in Japan arrived.

Masters champion Hideki Matsuyama still had reason to believe everyone was watching.

“If I say there’s no pressure I’ll be lying,” Matsuyama said after opening with a 69, not the best start in a round with such low scoring that only 13 players in the 60-man tournament were over par.

“Hopefully, I’ll be able to embrace the pressure that’s upon me and just try to put together a nice tournament here.”

Matsuyama had the biggest crowd, such as it was, with some 80 people tagging along, most of them Japanese media. He was 4 under through eight holes, only to make bogey from two poor tee shots and then didn’t have another birdie.

The struggle was more coronavirus-related than any external expectations. Matsuyama has played one round of competition the last five weeks after a positive COVID-19 test. One of his biggest concerns was rust and conditioning.

“Probably towards the end a little bit, the mental side and focus kind of faded away from me,” he said. “So that’s something that I need to put together for the rest of the week.”