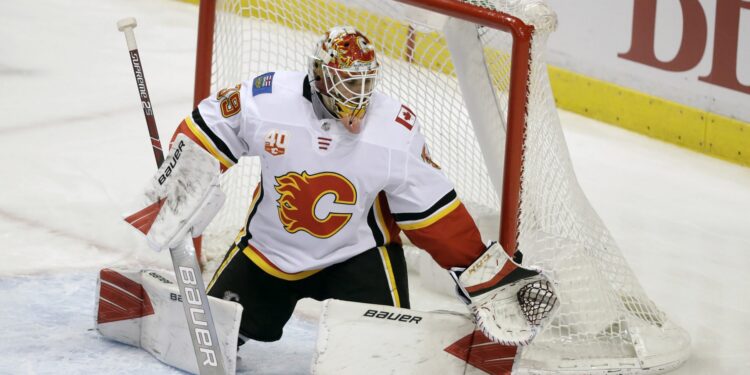 OTTAWA, Ontario — The Ottawa Senators will start the NHL season without goalie Cam Talbot after he suffered an upper-body injury.

Talbot will miss five to seven weeks with an upper-body injury, the club said.

TSN reported Talbot suffered a fractured rib on Sept. 24. He had been practicing through pain before an X-ray revealed the injury, per TSN.

Senators coach D.J. Smith said that Talbot was day-to-day after he “got a puck under the equipment.”

“He could probably play but there’s just no point (in the preseason),” Smith said about missing the game against Montreal.

The Senators claimed goalie Magnus Hellberg off waivers from Seattle on Monday.

The Senators acquired Talbot from Minnesota for fellow goalie Filip Gustavsson in July. A veteran goalie was needed after Matt Murray was dealt to the Toronto Maple Leafs.

Elsewhere, the Detroit Red Wings will look to carry over the intensity when they host the Pittsburgh Penguins in preseason action at Little Caesars Arena.

In the 3-0 shutout win, Lucas Raymond had a goal and two assists, while Jakub Vrana and Dylan Larkin also scored against Chicago in a matchup that Raymond labeled as “tough.”

“A lot of guys stood up for each other and for themselves,” Raymond said. “We played with a lot of energy. I think it’s good to play with this intensity as the season opener closes in.”

As the Red Wings begin their final week of preseason action, head coach Derek Lalonde said there’s been a lot to like throughout the club’s first four exhibition games.

“We’ve done a lot of the right things,” Lalonde said. “Our guys are starting to limit some risk in their game while still playing the right way. It’s a good sign going forward.”

“Just keep building on what we’ve been emphasizing,” Lalonde said. “And that’s play away from the puck. I think, even in the last two games, that’s been improved.”