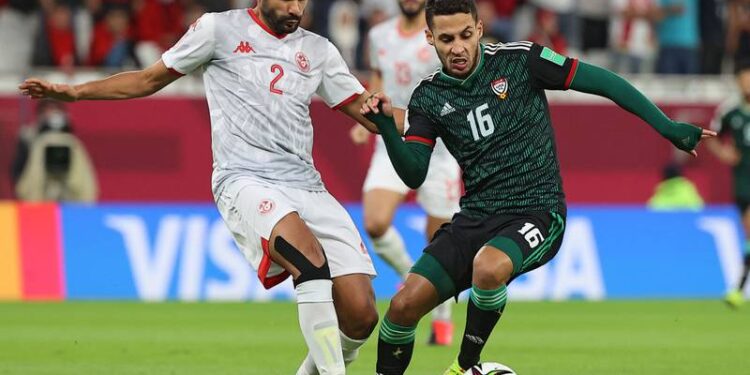 DOHA – The FIFA Arab Cup 2021 has its first confirmed quarter-finals, with Qatar-UAE and Tunisia-Oman set to kick off the knockout phase on Friday.

Those ties were set after a dramatic day of action on which fortunes fluctuated and positions changed, with the Eagles of Carthage leapfrogging the Emiratis into top spot in Group B and Oman streaking past Iraq to qualify from Group A.

The latter owed much to an impressive second-half showing from the hosts, with plenty in all four games for FIFA.com to reflect on ahead of the group stage’s final matchday.

Morocco, Algeria and Egypt have all booked their places in the next round, while Lebanon and Sudan are already out of contention.

Tunisia and UAE qualify to quarters

Tunisia defeated UAE 1-0 in group B of the Arab Cup in the match that took place at Al-Thumama Stadium to qualify together for the quarter-finals.

The Group B finale against Tunisia in Doha Monday had not even finished when news began to waft around Al-Thumama Stadium.

Mauritania, the bottom team in the standings, had beaten Syria 2-1 not far away in Al Wakrah. Now guaranteed second spot, the UAE had progressed.

With these results, Tunisia leads the standings of Group B with 6 points, ahead of the second-placed Emirates, with a goal difference only, and Syria comes third with four points, and Mauritania is in the fourth and last place with three points.

A place in the last eight of this rebranded FIFA event is theirs; there, on Friday, the UAE meet Qatar, tournament hosts and reigning Asian champions. While surely not the match-up manager Bert van Marwijk would have prioritised – Qatar are among the favourites for the trophy – the UAE’s tilt at the title rumbles on.

Elsewhere, Qatar defeated Iraq 3-0. Two spectacular games took place in parallel tonight at the Ahmad bin Ali and Al Bayt Stadiums, with just as spectacular outcomes. A total of six goals in between both games were scored; all of which were only scored by the winners of both games.

Oman dominated in their match against Bahrain, ending the game 3-0. The match was almost entirely one-sided, as Bahrain tried its utmost to hold the Omanis back, but the goals wouldn’t cease. The opening goal was scored just before the halftime whistle by Al Mandhar Al Alawi. The second followed closely after half-time in the 50th minute by Arshad Al-Alawi, with the final nail in the coffin being hammered in by Khalid Al Hajri in the 59th.

At the same time in Al-Bayt Stadium Qatar’s national team exceeded expectations, dishing out goals within ten minutes, for one of the most satisfying performances thus far in the FIFA Arab Cup 2021.

The initial goal was masterfully placed into the back of the net by Asian champion Almoez Ali, to end an eighty-minute-long goal drought and bring his team up 1-0.

One goal wasn’t enough, however, as two consecutive goals were scored by Akram Afif and Hassan Alhaydos in the 84th and 93rd minutes respectively, going beyond ensuring the win, and bringing the packed stadium to its feet.