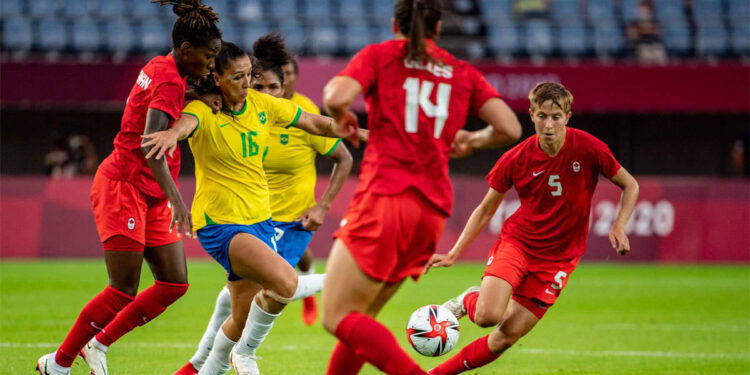 Canada reached the semi-finals of the women's soccer for the third consecutive Olympic Games as goalkeeper Stephanie Labbe saved two Brazil penalties in a 4-3 shootout win.

32
VIEWS
Share on FacebookShare on Twitter
TOKYO – Canada reached the semi-finals of the women’s soccer for the third consecutive Olympic Games as goalkeeper Stephanie Labbe saved two Brazil penalties in a 4-3 shootout win on Friday, while Australia stunned Britain in extra time.
After Canada captain Christine Sinclair’s penalty was saved by Barbara, Labbe rescued her side with two diving saves to keep out Brazil’s final two spot kicks from Andressa and Rafaelle, Reuters reported.
Labbe, who made four crucial saves in a goalless 120 minutes at Miyagi Stadium, did well to stay on the field after falling hard at the end of the second half of extra time.
The Rosengard goalkeeper’s heroic efforts ensured Brazil was denied another crack at the gold medal, having claimed silver in 2004 and 2008.
Australia forward Sam Kerr scored a last-gasp equaliser to force extra time against Britain at the Ibaraki Kashima Stadium, before adding another in the closing stages to help secure a 4-3 win for a place in the final four.
Britain striker Ellen White netted a hat-trick to take her goalscoring tally to six for the tournament but her team mate Caroline Weir had her penalty saved in extra time, leaving the door open for a late surge from the Matildas.
Canada, who took home bronze at the last two Olympics, will next face the winner of the quarter-final between the United States and the Netherlands.
Australia will next face either Sweden or hosts Japan.
Tags: AustraliaBrazilBritainCanadaTokyo Olympic Gamestop newsWomen's Soccer