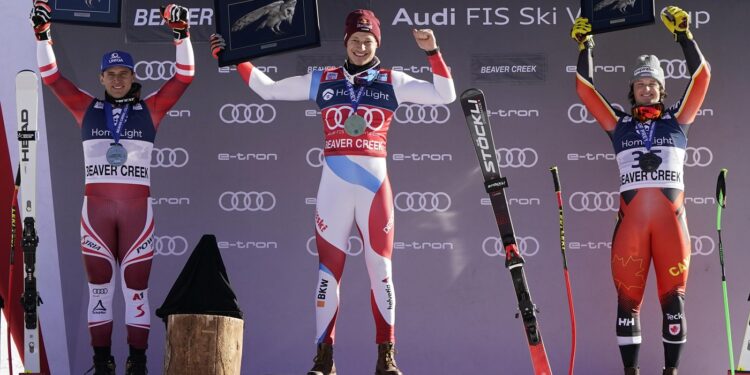 It’s the second victory of the young season for the 24-year-old Odermatt, who captured a giant slalom race in Austria in October.

Odermatt navigated the technical course in a time of 1 minute, 08.61 seconds to hold off Austria’s Matthias Mayer by 0.78 seconds.

The real surprise on a warm day at Beaver Creek was the performance of Canadian Broderick Thompson.

The 35th racer on the course, Thompson found a fast line to wind up third and knock Germany’s Andreas Sander off the podium.

It was Thompson’s first-ever World Cup podium finish. The 27-year-old said his overriding emotion was “disbelief.”

“I knew I had a decent run but I looked at the time and seeing third, I can´t put words to it,” he said according to AP.

Another impressive performance from Odermatt, who’s turning into the one to watch with the Beijing Games around the corner.

“His skiing is good. His tactic is very aggressive,” Mayer said. “And that´s what makes him so fast.”

The top American finish was Ryan Cochran-Siegle in a tie for 19th place and 1.95 seconds behind Odermatt’s time.

A total of 14 racers didn’t finish the challenging course.