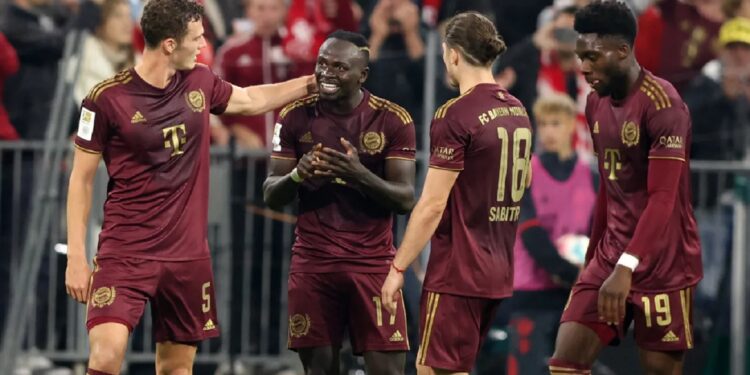 Bayern Munich players celebrate after scoring during their Bundesliga match against Bayer 04 Leverkusen in Munich.

The 19-year-old Musiala was involved in all three of the first-half goals. And this time – in contrast to the 1-0 defeat in Augsburg or the three preceding draws – fortune was smiling on Bayern. Every score was helped on its way by a slight deflection – or a gift from the opposition.

The 10-time defending champion wasted little time in answering its first loss of the season in Augsburg as Musiala skipped down the right wing and crossed for Leroy Sane to open the scoring in the third minute.

Thomas Müller set up Musiala to score in the 17th, and Musiala was involved again when he set up Sadio Mané to end his six-game scoring drought in the 39th. It was Mane´s first goal in Munich for his new team.

Mane thought he´d scored again early in the second half, but the goal was ruled out after a VAR check for an apparent foul by Matthijs de Ligt on Odilon Kossounou in the buildup.

Bayern´s players kept playing while the Leverkusen defender was lying on the ground after a clash of heads with de Ligt and Musiala again provided the final pass. Referee Tobias Stieler checked replays while Kossounou received treatment and consequently penalized de Ligt for a foul.

Bayern goalkeeper Manuel Neuer denied Amine Adli in the visitors´ only real chance, while his counterpart Lukas Hradecky ended an evening to forget by gifting Muller Bayern´s fourth goal in the 84th. Hradecky wanted to play the ball out but slipped and inadvertently provided the assist for Muller, whose celebrations were muted by embarrassment.

Musiala turned provider again in the 39th minute, guiding a ball to Mane who scored for the first time since August 21 – which was Bayern’s last victory in the Bundesliga.

Mueller added a fourth in the 84th minute thanks to a howler from Leverkusen keeper Lukas Hradecky, who slipped while trying to pass, sending the ball directly into Mueller’s path.

The goal was the Bayern and Germany forward’s first of the campaign.

The win sees Bayern go second in the table, with the rest of the weekend’s games to play.

The loss compounds Leverkusen’s misery, with the visitors having won just one game from eight attempts this campaign, in addition to an embarrassing early German Cup exit.