Morocco plots another shock against Spain A female Moroccan fan cheers before the start of Belgium and Morocco on Nov. 27, 2022.

DOHA – Spain will be favourites to beat Morocco in the World Cup last 16 on Tuesday but the teams’ experiences in the group phase were a reminder of the unpredictability of tournament football.

Spain, who humbled Costa Rica 7-0 in their opening game, finished second in Group E behind Japan while Morocco defied the odds to win Group F ahead of Croatia and Belgium.

The Spanish, world champions in 2010, lost their last group match to Japan and face a difficult test from a Moroccan side growing in confidence under coach Walid Regragui.

After Morocco had beaten Canada 2-1 to reach the last 16 for only the second time and first since 1986, FIFA posted a photo of Regragui holding an avocado with a soccer ball inside it and pointing his finger at his head in a defiant message to his critics.

The goal they conceded to Canada was their first in six matches under Regragui and during the victory celebrations, the players gathered around the coach touching his head. “They like to hit me on the head. Perhaps this will be lucky omen for them,” Regragui said according to Reuters.

The Atlas Lions started the finals with a goalless draw against Croatia before a convincing 2-0 victory over Belgium, a win achieved despite the absence of goalkeeper Yassine Bounou who pulled out due to illness just before kickoff.

Elsewhere, Spain’s Rodri said that his country have been warned about suffering another “collapse” when they face Morocco in the World Cup last 16 on Tuesday.

La Roja fell to a shock 2-1 defeat by Japan on Thursday and finished second in Group E as a result, with the Samurai Blue netting two goals in a dramatic period at the start of the second half.

Manchester City midfielder Rodri, playing at centre-back for Spain, said his team would not renounce their style of football but had to avoid unnecessary risks.

“There were 10 minutes of collapse, and we’ve been warned now that a goal can put you out,” Rodri said according to AFP.

“We know it, the coach was clear, and now we’re training with happiness and determination.”

For a short period during their last group game Spain face elimination, when Costa Rica were ahead against Germany, but Hansi Flick’s side recovered to win to save La Roja. 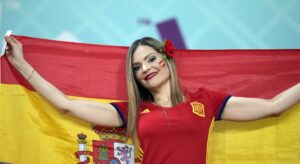 Rodri believes Spain has recovered from their Japan defeat after reflecting on the game and is now ready to move on. “We have totally recovered, it’s true that it was an intense moment in all senses,” he added.

“The team went out to win, with ambition. We had a good first-half; it’s a game which got away from us in 10 minutes.

“We had a day of reflection, which suited us well, now the team is recovered and training with maximum joy and maximum hope.”