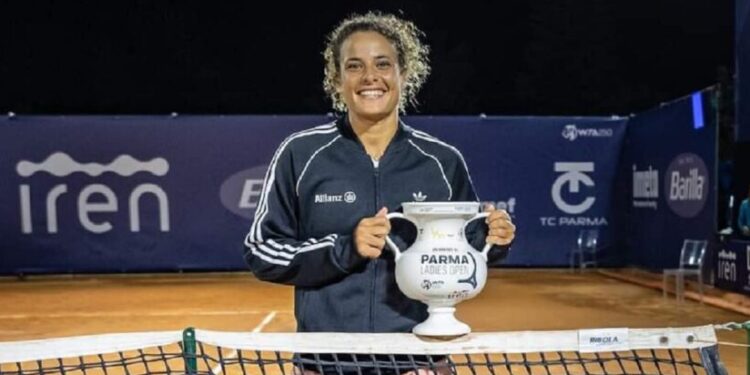 Mayar Sherif wins the Parma Ladies Open and become the first woman from Egypt to win a WTA Tour title.

Sherif’s win over No.7 Sakkari was her first top 10 win of her career.

Sherif’s history-making day required a grueling effort to win both the semi-final and final on the same day.

The 26-year-old needed nearly three hours to defeat No.6 seed Ana Bogdan 6-4, 3-6, 6-4 in the semi-finals earlier in the day, while Sakkari eased through to her first final since Indian Wells with a 7-5, 6-2 win over Danka Kovinic.

“I’m exhausted,” Sherif was quoted as saying by the WTA Tour official website. “It was a very tough day for me, many hours on court. I’m very happy that I pulled it off. I had to dig very deep.”

“The first match was emotionally and mentally tough. There were so many key moments in the match, a lot of pressure.

“But after I won that match it gave me a lot of confidence so I used that for the match right after.”

The final surprisingly went the way of Sherif, who first entered the WTA top 100 in August of last year and has reached a high of 44th in the rankings.

She began this week at number 74 but will climb again after the biggest success of her career.

Playing in her second career WTA final and first of the season, Sherif quickly set aside any concerns of fatigue from her semi-final effort.

Sherif, who earlier this year became the first Egyptian woman to win a main draw match at Roland Garros, reached the final by beating Ana Bogdan 6-4, 3-6, 6-4.

After falling behind an early break at 2-0, Sherif buckled down and broke Sakkari four times in the opening set. Taking advantage of Sakkari’s low first-serve percentage of 44 per cent,

Sherif converted all four break points she earned in the first set while playing a physical, disciplined game from the baseline.

As she served to force a tiebreak at 5-6, Sakkari failed to convert three game points from 40-15 up. The top seed misfired on back-to-back forehands to drop the set after 54 minutes.

Sakkari once again earned an early break in the second set at 2-0 but failed to hold her lead. In the face of Sherif’s relentless consistency, Sakkari continued to misfire. Sherif broke back and leveled the set at 2-2 and would lose just one game for the remainder of the match.

Sakkari was bidding to win her first title since winning Rabat in 2019. The loss dropped her record in WTA finals to 1-5. Sakkari will head to the Agel Open in Ostrava next.

In doubles, the unseeded Czech team of Anastasia Detiuc and Miriam Kolodziejova came from a set down to defeat Arantxa Rus and Tamara Zidansek 1-6, 6-3, 10-8 to win their first title.