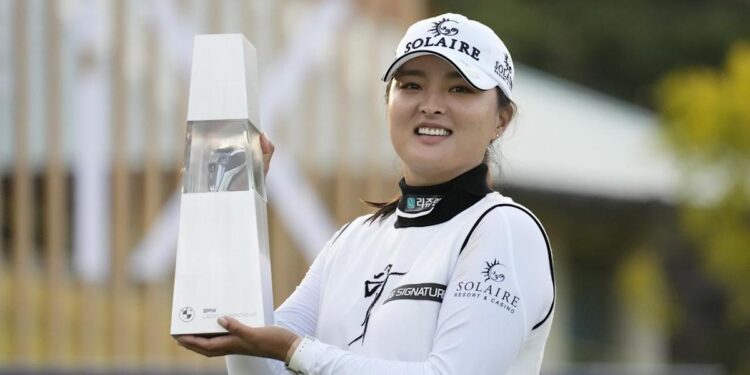 Ko Jin-young staved off a spirited challenge from Lim Hee-jeong on Sunday to seal a dramatic playoff victory in the BMW Ladies Championship.

BUSAN, South Korea – World number two Ko Jin-young staved off a spirited challenge from Lim Hee-jeong on Sunday to seal a dramatic playoff victory in the BMW Ladies Championship in Busan and become the 200th South Korean champion on the LPGA Tour.

Ko set the LPGA International Busan course alight with an eight-under-par 64 in the final round that had eight birdies, including one in the 17th, to grab a share of top spot.

But Lim made a par on 18 to stay level at 22-under overall, forcing a playoff.

The 26-year-old Ko made another gain in the first playoff hole – the par-four 18th – after a superb approach shot and overnight leader Lim could only manage a par to hand the championship to her compatriot.

“I wasn’t that nervous going into the playoff. I think I was feeding off the confidence I had during the round,” Ko said of her first ever playoff.

The victory is the 11th of Ko’s career and follows her wins in the Volunteers of America Classic, the Cambia Portland Classic and the 2021 Cognizant Founders Cup this year.

She is projected to become the top-ranked women’s golfer in the world replacing American Nelly Korda.

“I wasn’t too conscious of that. I always feel if your game is in good form and you keep at it, you can reach that ranking,” Ko added.

“I felt if I worked hard I might have a chance this year. So I did return to that spot earlier than I expected. I’m going to do my best so that I can maintain that position.”

It was a disappointing finish for the 21-year-old Lim who came into the final round of the $2 million event on the back of a course record 198 after 54 holes.

Ko, who was second after three rounds, briefly claimed the outright lead following the 12th hole when she sank a 10-foot putt and was neck-and-neck with Lim for much of the day.

Having fired six birdies on the front nine, she raised her game after a brief dip to complete the par-four 17th hole in three shots to improve her title hopes.