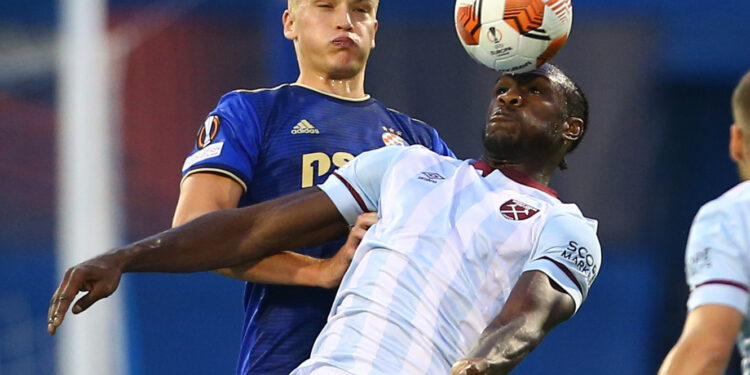 West Ham United's Michail Antonio in action during the match against Dinamo Zagreb.

ZAGREB – West Ham began their UEFA Europa League campaign with a 2-0 win at Dinamo Zagreb in Group H while Celtic threw away a two-goal lead in a 4-3 defeat by Real Betis in Group G in the opening round of games.

Red Star Belgrade, the 1991 European Cup winners, ground out a 2-1 home win over Portuguese rivals Braga while Bulgarians Ludogorets Razgrad earned a 1-1 draw at Danish side Midtjylland in group F.

Michail Antonio gave West Ham a 22nd-minute lead in the Croatian capital when he rounded goalkeeper Dominik Livakovic and rolled the ball into an empty net after intercepting a poor back pass by Kevin Theophile-Catherine.

Declan Rice sealed the win with a fine individual effort in the 50th minute as he raced clear of his marker down the left from the halfway line and drilled the ball home through Livakovic’s legs from eight metres.

A stoppage-time goal from Paul Onuachu gave Belgians Genk a 1-0 win at Rapid Vienna in the other group H match.

A bundled goal by Albian Ajeti and a Josip Juranovic penalty gave Celtic a 2-0 lead at Betis inside the opening 27 minutes but their joy was short-lived as the home side were level eight minutes later through Juan Miranda and Juanmi.

Betis rocked the visitors with another two quickfire goals shortly after the break, nosing ahead through Borja Iglesias in the 50th minute before Juanmi netted his second two minutes later after a slick move.

Anthony Ralston set up a tense finish when he pulled one back for Celtic in the 87th minute but Betis held on to come out on top in the seven-goal thriller.

Substitute Pierre-Emile Hojbjerg’s equaliser allowed Tottenham Hotspur to come away with a 2-2 draw from their trip to France to play Rennes in the new Europa Conference League on Thursday.

Loic Bade’s own goal had given Spurs the lead in an entertaining encounter in Brittany but Flavien Tait equalised and Gaetan Laborde put Rennes ahead in the 72nd minute.

That lead was swiftly cancelled out by Hojbjerg and in the circumstances, it is a good result for Nuno Espirito Santo’s Tottenham side, who were on the rebound from their 3-0 drubbing at Crystal Palace last weekend.

The result also pleased the Rennes support who, frustrated at recent performances, had unfurled a giant banner before kick-off with the message in English: “Are you ready to fight?”

While finishing in the Premier League top four and returning to the Champions League has to take priority for Spurs, they would be wise not to neglect a competition that offers a realistic route to silverware for a club that has not won anything since the League Cup in 2008.

Their next game in group G is against Slovenian champions Mura, on paper the weakest team in the group and who lost 2-0 at home to Dutch side Vitesse Arnhem on Thursday.

However, this was hardly a smooth trip to France for Tottenham before they face Chelsea at the weekend.

They were forced to spend Wednesday night 100 kilometres away in the town of Saint-Brieuc because an international farming exhibition in Rennes this week meant a shortage of hotel rooms.

Nuno then lost both his starting wingers, Steven Bergwijn and Lucas Moura, to knocks during the game.

The coach had made seven changes from the Crystal Palace debacle, with Son Heung-min among the players left behind in England while Hugo Lloris was one of those left on the bench.

Harry Kane, whose only goals so far this season came against Pacos de Ferreira of Portugal in the playoff round, did play and wore the captain’s armband.

The visitors took the lead inside 11 minutes when Kane released Lucas down the right flank and the Brazilian’s low ball across goal was turned into his own net by the unfortunate Bade.

However, Rennes is an ambitious club, having spent in the region of 80 million euros on new signings in the summer window.

They drew level midway through the first half when Tait brought the ball down beautifully, played a one-two with Serhou Guirassy and curled a fine low shot beyond Pierluigi Gollini in goal.

In the other group G game, Bayer Leverkusen fought back for a 2-1 home win against Ferencvaros as Exequiel Palacios and Florian Wirtz cancelled out an early Ryan Mmaee opener for the Hungarian side.

Left-back Milan Rodic fired Red Star ahead in the 75th minute and Braga hit back through Wenderson a minute later, only for Aleksandar Katai to delight the fervent home fans with an 85th-minute penalty.

In group E, a Thomas Strakosha own goal midway through the second half helped Galatasaray to a 1-0 home win over Lazio while 10-man Lokomotiv Moscow earned a last-gasp 1-1 home draw with Olympique Marseille.

Having had Nayair Tiknizyan sent off early in the second half, Lokomotiv fell behind to a Cengiz Under penalty before Faustino Anjorin salvaged a point for the Russian side with an 89th-minute goal.