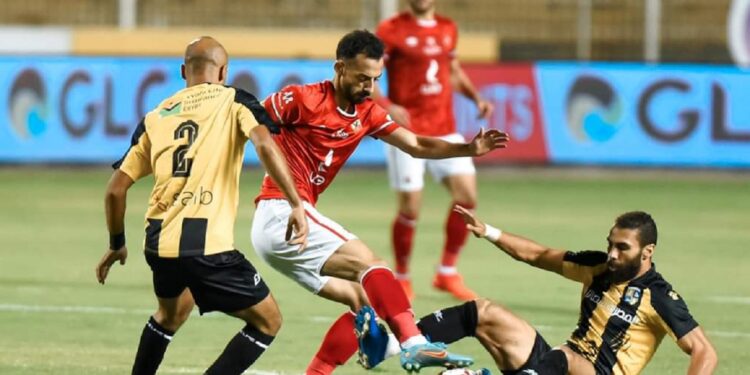 Al-Ahly’s winger Ahmed Abdelkader (C) vying for the ball against Arab Contractors defenders during their match at the Egyptian Premier League.

The draw leaves Al-Ahly lie third in the table with 55 points from 26 matches, four behind Pyramids and eight adrift of leaders Zamalek, who both played a game more with seven rounds remaining.

Arab Contractors remained third from bottom with 25 points from 27 matches, just one off the safety zone.

In his post-match press conference, Al-Ahly Portuguese coach Ricardo Soares talked about the reasons behind the draw along with explaining why Percy Tau was not part of the team’s squad for the game.

“I’m not going to give any details excuses; however, we have played a lot of games in a short amount of time and that doesn’t happen anywhere in the world. Moreover, the referee’s decisions further complicated the game on us,” Soares said.

“Percy Tau is not match fit yet; therefore, he was not selected for the game. We also have to keep in mind that we have a long list of injuries, which causes us to be cautious when making any decisions,” Soares added according to the club official website.

In the 5th minute of the match, winger Ahmed Abdelkader picked up a muscle injury and was forced to leave the field. Ziad Tarek joined the game instead of Abdelkader.

In the 33rd minute, The Red Devils had a dangerous scoring chance. Tarek received the ball and sent a stunning pass to Yasser Ibrahim inside the box. Yasser then sent a ground cross, but the Arab Contractors’ defender sent the ball to a corner kick.

In the 37th minute, the referee awarded Al-Ahly a penalty due to a late challenge against striker Hassan inside the box. However, Tunisian left-back Ali Maaloul’s shot was saved by Arab Contractors’ goalkeeper Mahmoud Abou el-Souod.

Two minutes later, Ahly missed another scoring chance. Maaloul delivered a ground cross and Hassan tried to convert the ball into the back of the net, but he missed the target and the ball went to a goal-kick.

The second-half started with a dangerous scoring chance from the Red Devils. Tarek sent a sensational cross from the right flank, and Hamdy Fathy met the ball with a strong header. However, the ball hit the woodwork.

In the 69th minute, Soares used his bench for the third time in the game, as playmaker Mohamed Magdy Afsha joined the field instead of defender Mahmoud Metwally.

The final minutes of the game went on as Al-Ahly kept trying to score the winner, but the referee blew his final whistle to declare a goalless draw.