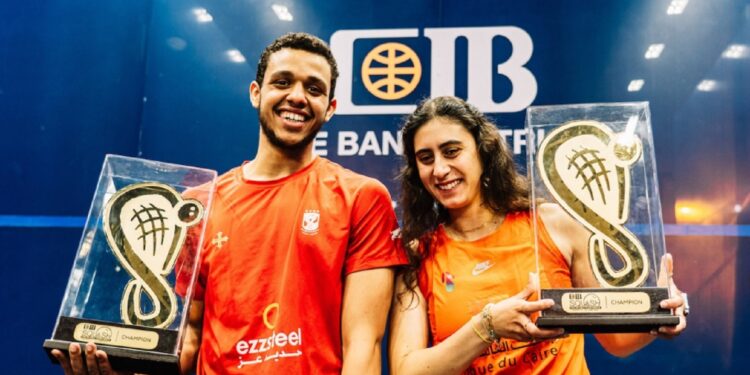 Nour el-Sherbini (R) and Mostafa Asal posing with the trophies after being crowned the 2021-22 CIB PSA World Tour Finals champions.

The CIB PSA World Tour Finals is the season finale for the 2021-22 PSA World Tour season and El-Sherbini ensured that she closed out the campaign having won two of the biggest titles on the tour.

The women’s title decider was a repeat of May’s CIB PSA World Championship final and once again El-Sherbini got the better of her compatriot after a masterclass of a performance saw her win 11-6, 11-8, 11-5 in 43 minutes.

World No.2 El-Sherbini had already beaten the World No.3 – Hania el-Hammamy – and World No.4 Amanda Sobhy en route to the final, despite suffering with an ankle injury throughout the event.

Gohar, meanwhile, was recently crowned the PSA Female Player of the Year after an incredible season which has seen her win seven PSA titles; while she was the defending champion going into the final.

But she was put to the sword by a dominant El-Sherbini, who has won this event for the first time since 2018, while she has now won her 30th PSA title.

“I’m really happy with my performance, I think this was my best performance of the whole season, so I’m glad I’m ending on a win,” said El-Sherbini.

“I’ve been struggling the whole season, but it’s a credit to all the other players who have been playing really well.

“I’ve been trying to push every match and I’m glad that I stopped in the middle of the season, it helped me a lot to regroup. I’m really happy with the last three tournaments I played and now I can rest and come back stronger.

“She [Nouran Gohar] took the No.1 spot from me and has been winning all the Platinum events, so that shows how on form she has been.

It’s always challenging and tough, she didn’t lose a game all the tournament. I’m happy with the rivalry and the challenge we have and I’m looking forward to the challenge next season.”

El Sherbini showed no sign of any nerves in the opening exchanges in the first game as she raced out to a 6-0 lead to pile the pressure onto the No.1 seed early in the match. ‘The Warrior Princess’ continued to fire the ball in short and went through to take the opening game 11-6.

Gohar started to find her way into the match in the second game with her line and length drastically improving to force El-Sherbini back in the court. Gohar found herself 7-5 up in the game but back came El-Sherbini, taking six of the next seven points to take a crucial 2-0 lead.

There was no stopping the World No.2 as she moved from strength to strength to twist and turn Gohar continually.

El-Sherbini took full advantage of all of her attacking opportunities and set herself up with 8 championship balls. Despite a mini-comeback from Gohar, El-Sherbini closed out the match to lift her second World Tour Finals title.

World No.4 Mostafa Asal has retained the men’s title following a 13-11, 11-8, 11-7 victory over New Zealand’s Coll in 76 minutes, ensuring he has now captured the eighth PSA title of his burgeoning career.

The 21-year-old – who has now won four major PSA titles after also capturing the US Open and El-Gouna International trophies this season – was meeting Coll for the second final in a row after he dismantled the former World No.1 in the El-Gouna title decider earlier this month.

He was made to work hard for his win in a tightly-contested fixture, but had the extra quality at the crucial moments to close out the victory, winning his third PSA title of the season.

“It’s unbelievable for me, having two trophies for the same tournament and defending my title is unreal,” said Asal.

“Thanks to this crowd, Karim Darwish for organising this amazing tournament, Lee Beachill and all of PSA for helping me.

“All credit to Paul, he’s an unbelievable player and one of the most honest players on tour, thanks to him for a great battle and I’m looking forward to more battles with him for sure.

“After the first game, I looked at the screen and it was 40 minutes and I thought I couldn’t continue like this. I managed to win the third and to win the match is something unbelievable for me and I’m looking forward to playing here again,” Asal added.

“Thanks to my parents, my friends, my coaches. It’s unreal support, I’m playing in front of my friends and I live two minutes from here so it’s hard to express my feelings.”