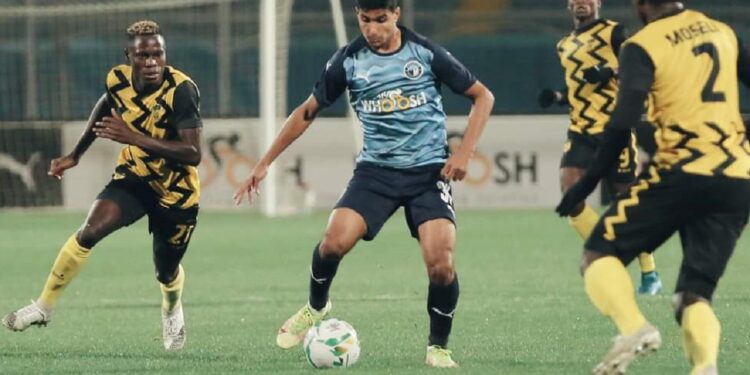 Pyramids’ striker Ibrahim Adel (C) vying for the ball against DR Congo’s AS Maniema Union defender during their match at the CAF Confederation Cup in Cairo.

Meanwhile in Benghazi, there was penalty joy for Al-Ahli of Tripoli as they joined the group stage, beating Stade Malien on shootout.

In Cairo, Pyramids who reached the semi-finals last season – after being losing finalists the season before – repeated their home 1-0 win over DR Congo’s AS Maniema Union to reach the group stage winning 2-0 on aggregate.

Striker Ibrahim Adel scored the hosts only goal after 36 minutes, as Pyramids cruised to the group stage for the third time in as many CAF Interclub seasons since their debut in 2019-20.

In Alexandria, Al-Masry of Port Saidneeded to overturn their first-leg 2-1 defeat to Nigeria’s Rivers United last weekend. And they did with the slightest of advantages, the CAF official website reported.

Mohamed Abdel Lateef “Grendo” scored what proved to be the game’s lone goal after 14 minutes, to give Al-Masry a 1-0 victory, as they reached the group stage on away goals’ rule after a 2-2 aggregate draw.

Mohamed Shtewi scored the game’s lone goal after 69 minutes, as Al-Ahli Tripoli canceled their away loss with the same result last weekend in Bamako.

In the shootout, The Libyans prevailed 4-2 to reach the group stage amid wild celebrations from their few supporters in the stands.

The quartet completed a 14-teams pack in the mini-league stage, with the last two seats to be determined between Al-Ittihad (Libya) – Enyimba (Nigeria) and JS Kabylie (Algeria) – Royal Leopards (Eswatini).

In Bechar, Algeria’s JS Saoura produced an amazing comeback to beat Ghana’s Hearts of Oak 4-0 and reach the group stage winning 4-2 on aggregate.

After losing the first-leg 2-0 in Accra last weekend, JS Saoura responded in style and took the lead after 21 minutes through Abdeldjalil Saad. Oussama Bellatreche doubled the hosts lead and canceled Hearts of Oak first leg win.

Bellatreche completed his brace three minutes after the break to give Saoura an aggregate lead, before Hamro Aziz put the game to bed two minutes from time.

Meanwhile in Bamako, Mali’s Binga couldn’t find a similar comeback, as they fell short to beat Zanaco 2-0, leaving the Zambians to reach the group stage winning 3-2 on aggregate.

Taking a 3-0 lead from the first leg, Zanaco kept their hosts at bay till the 80th minute when Youssouf Diallo gave Binga the lead.

The Malians had a penalty three minutes into injury time, and Youssou Coulibaly scored from the spot to reduce the deficit to a single goal. But it was still not enough as Zanaco reached the group stage winning 3-2 on aggregate.

Aymen Harzi strike from the spot after 35 minutes was all what the Tunisians needed to win the game, as Tusker had Karlos Kirenge sent off for a second booking four minutes into second half stoppage time.

Elsewhere, Cameroon and Côte d’Ivoire giants Coton Sport and ASEC Mimosas reached the Cup group stage, as Niger’s US Gendarmerie Nationale rewrote history by being the second ever side from Niger and the first since 2010 to reach the mini league stage of a CAF competition.

Meanwhile Nigeria’s Enyimba achieved home win over Libya’s Al-Ittihad, with the first-leg being rescheduled to a date confirmed later.

In Luanda, ASEC Mimosas came to Angola leading 3-1 over GD Interclube from the home leg. They eased their nerves as early as the second minute when Serge Poku put them ahead to throw more pressure on the hosts.

Mano Luis restored parity for Interclube just three minutes later to give the hosts some hope. But all hopes were shattered when Kamir Konate (18) and Stephane Aziz Ki (34) made it 3-1 for ASEC before the break, as the Ivorians looked sure of their qualification.

Mano completed his brace with a second consolation goal for the hosts after 62 minutes, but without stopping ASEc from celebrating an aggregate 5-2 win.

Meanwhile in Douala, Souaibou Marou double was all that Coton Sport needed to defeat Mauritanian visitors FC Noaudhibou 2-0 to qualify on the same aggregate score.

Marou broke the deadlock after 22 minutes and doubled his side’s lead seven minutes later from the spot, as Coton reached the group stage of the competition they were semifinalists last season.