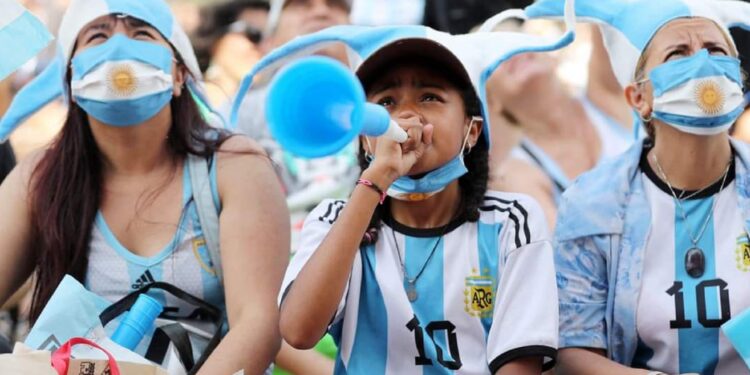 Supporters of Argentina cheer for their national team ahead of group C match against Poland on Nov. 30, 2022.

DOHA – Argentina is hot favourites to beat Australia on Saturday in pursuit of Lionel Messi’s dream of winning a first World Cup, but they more than anyone have learned not to underestimate an underdog, especially the hard-battling Socceroos.

Argentina suffered one of the biggest upsets in World Cup history with their opening defeat to Saudi Arabia, but recovered their poise to swagger past Mexico and Poland into the last 16.

Australia, ranked 35 places below Argentina, have already surpassed expectations in winning twice to earn their place at Qatar’s Ahmad bin Ali Stadium this weekend for one of the biggest games in their history.

“But one thing I can tell you, we will be ready,” he added according to Reuters.

Overjoyed and exhausted after reaching the World Cup knockout stage for only the second time, Australia will have to play the game of their lives to overcome an Argentina side oozing talent from front to back.

They will be relying on the same fitness, muscle and never-say-die attitude that saw off Tunisia and Denmark, epitomised by hulking defender Harry Souttar, who has played out of his skin despite only just returning from a lengthy layoff.

“They are tough. Anyone who thinks the match against Australia will be easy is wrong,” Argentina’s Scaloni said.

His side will again be roared on by an enormous following as Argentines show themselves to be easily the loudest and possibly the largest fan base at Qatar.

Argentine striker Angel Di Maria was taken off as a precaution in their last game against Poland but should be fit to play alongside Messi again, though Scaloni has plenty of options to throw against the Australians.

Reaching the quarter-finals would be dreamland for Australia, but for Argentina it is a bare minimum national expectation as they seek a third World Cup trophy.

Messi, on his fifth and final quest to win the World Cup and match his great predecessor Diego Maradona in the No. 10 shirt, is enjoying a harmony with fans like never before and will be relishing the chance to delight them further against Australia.

Elsewhere, Australia will put their bodies on the line to stop Lionel Messi and spring a surprise against Argentina in the World Cup last 16, tough-tackling Milos Degenek warned.

The defender, who made his World Cup debut in Australia’s 1-0 group win over Denmark Wednesday, said Messi is his hero but all sentiments will be thrown aside when they meet on Saturday.

“You know I have always loved Messi, I think he is the greatest to have played the game,” said the 28-year-old according to AFP.

But he added: “It’s not an honour to play against him because he is just a human, as we all are. It is an honour to be in the round of 16 of a World Cup. That is the honour in itself.”

Australian goalkeeper Mathew Ryan has kept two clean sheets in a row in successive 1-0 victories to take the Socceroos into the knockouts for only the second time in their history.

They will be heavy underdogs against Argentina, but Degenek said: “We have to believe and we have to be confident in our abilities to stop every attack.

“Whether that is going to be possible or not, I am not sure, but I know we are going to give 110 percent to stop everything that goes towards Matty’s goal.”

Degenek knows that Argentina, who bounced back from a shock defeat to Saudi Arabia in their opener, will be desperate to give Messi a first World Cup title in what will surely be his last attempt.

Australia revealed that the mother-in-law of another defender, Bailey Wright, had died during the night but he will stay with the squad.

The Sunderland player came on as a substitute against Denmark and devoted the win to her.

“It’s not something you can wish upon anyone,” said Degenek.

“He knows that we are his second family, we are going to be behind him.”

Degenek said it highlighted the stresses that footballers go through behind the scenes.

“It is a lot more emotions, a lot more things involved in football than just playing,” Degenek said.

Argentina vs Australia at 9 pm CLT