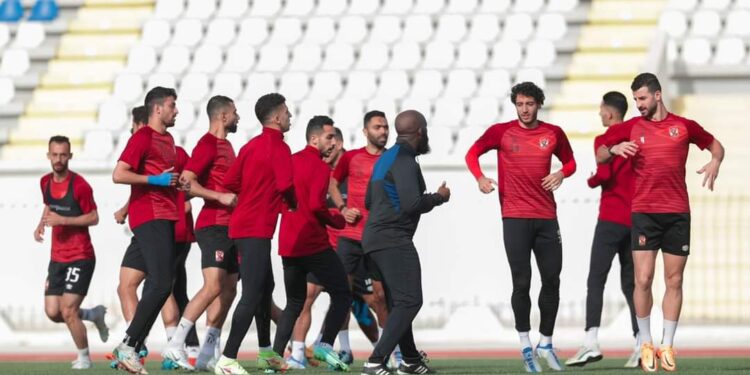 Al-Ahly players during a training session in readiness for their match against Wydad Casablanca in Monday’s CAF Champions League final at the Mohamed V Stadium.

RABAT – Egyptian giants Al-Ahly will be seeking to cement their place as the dominant force in club football on the continent when they meet Wydad Casablanca in Monday’s CAF Champions League final at the Mohamed V Stadium at 9:00pm Cairo Local Time.

The Cairo club is on course for an unprecedented third successive Champions League triumph, achieving what no other side has done in a more than half century of the competition.

Ahly is among four teams who have won the marquee African club competition twice in a row since its 1964 debut, but all of them failed when attempting to secure a third straight success.

Having flopped in 2007 and 2014, the Cairo Red Devils have a third chance after victories over fellow Egyptians Zamalek and South Africans Kaizer Chiefs in the previous two title deciders.

But hopes of further glory suffered a huge blow when the Confederation of African Football (CAF) controversially decided to stage the final at the Stade Mohammed V, the home ground of Wydad.

CAF said Morocco and Senegal were the only countries who applied to host the highlight of the African club calendar and the west Africans later withdrew, without offering an explanation.

Angry Ahly officials asked the Switzerland-based Court of Arbitration for Sport (CAS) – the highest legal body in sport – to force CAF to choose a neutral venue instead, but the appeal failed.

Playing in Casablanca means Wydad will have the backing of about 35 000 supporters in a crowd limited to 45 000 – two thirds of the capacity.

South Africa-born Ahly coach Pitso Mosimane believes that Al-Ahly can succeed and win the competition a record-extending 11th time since first conquering the continent 40 years ago.

“I want to win every competition Ahly is involved in. Our millions of supporters expect nothing less,” he told the Egyptian media according to AFP.

“(Portuguese coach) Manuel Jose had several spells as Ahly coach and achieved a great deal – but he could not win every competition.

“I do not know whether I can surpass him in terms of the number of titles Ahly win, but I am certainly going to try.”

Jose was fortunate to coach the greatest Ahly team of them all – a 2005-2008 squad including three Egyptian legends, goalkeeper Essam el-Hadary, defender Wael Gomaa and midfielder Mohamed Aboutrika.

What the Portuguese could not achieve was three Champions League titles in a row, so Mosimane has a chance to create history in Casablanca.

Wydad and Ahly have clashed five times in Casablanca and honours are even with two victories each and one draw.

The most recent meeting was the 2020 semi-final first-leg, won 2-0 by Ahly through goals from Mohamed Magdy ‘Afsha’ and Ali Maaloul.

Tunisian Maaloul, a classy left-back with a fondness for pushing forward, is set to start on Monday, but attacking midfielder Magdy could be among the substitutes.