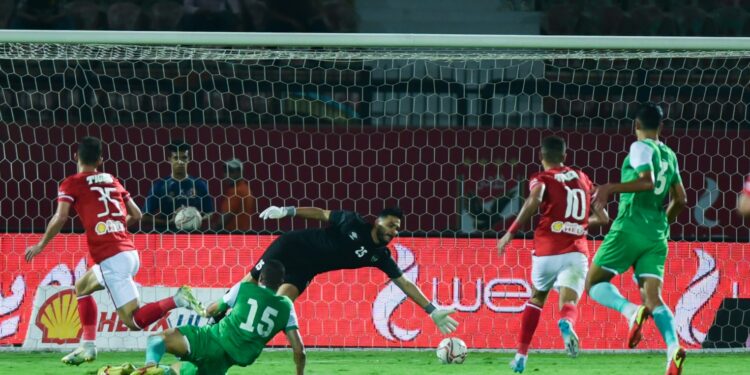 Al-Ahly achieved an important 4-1 victory over Eastern Company in the Egyptian League at Al Ahly WE Al Salam Stadium.

The Red devils put on a great performance t and managed to secure the victory, thanks to goals from Hussien El Shahat, Taher Mohamed Taher, Ahmed Abdelkader, and Walid Soliman.

Al-Ahly started the game with a frontline pressure, as they were searching to score the early opener.

In the 25th minute, Al-Ahly managed to score their first goal in the game.

Ramy Rabia sent a brilliant long pass inside the box, to Hussien El Shahat who controlled the ball and with a brilliant chip, our winger broke the deadlock to gift us a 1-0 lead.

Three minutes later, they were awarded a penalty due to a late challenge from the opponent’s defender inside the box against Mahmoud Wahid.

Taher Mohamed Taher stood behind the ball and converted it into the back of the net to make it 2-0.

In the 34th minute, Al-Ahly  had another scoring chance. Ahmed Nabil Koka received the ball at the edge of the box, then he blasted a strong shot, but it went over the bar.

The players kept pushing to score another goal, but the referee blew his halftime whistle to declare a 2-0 lead for the Red Eagles.

The second half started with our players searching to score another goal.

In the 57th minute, Amed Abdelkader added a third goal, thanks to his brilliant finish. Abdelkader collected a miss pass from the opponent in the midfield and then dribbled towards the goal. With a sensational finish, Abdelkader converted the ball into the bottom corner to make it 3-0 for the Red Eagles.

In the 59th minute, Sami Komsan made his first substitution in the match, as Badr Benoun joined the game instead of Mahmoud Metwally.

In the 69th minute, Moustafa Shobier made a heroic save and blocked a dangerous shot to keep his net clean.

In the dying minutes of the encounter, Salah Mohsen sprinted on the left flank and sent a cross inside the box. Walid Soliman was in the right place to meet the ball with his head to secure a 4-1 win for the Red Eagles.