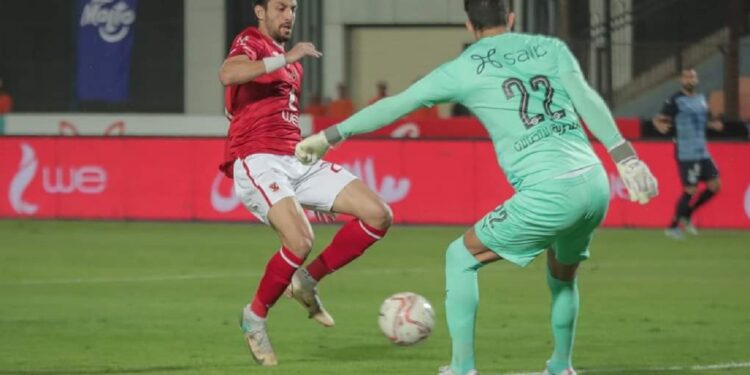 The Red Devils secured a spot in the semi-finals after defeating Pyramids FC 2-1 in the tournament’s quarter-finals at Cairo International Stadium, thanks to the goals of winger Taher Mohamed Taher and striker Hossam Hassan.

Al-Ahly will now face Petrojet in the semi-final.

Pyramids FC tried to score an opening goal in the first 15 minutes of the game; however, Al-Ahly stood their ground.

It was not until the 18th minute when we managed to score the opening goal in the game. Mohamed Magdy ‘Afsha’ sent a brilliant cross from a corner to Taher, who lobbed the ball into the net with his brilliant header.

Following the goal, Pyramids upped their pressure but once again the Red Devils were able to deny all their chances.

In the final minutes of the first-half, Al-Ahly tried to double the score but they were not able to convert our chances into the net.

The second-half started with a substitution from Al-Ahly’s interim head coach Sami Komsan, as striker Salah Mohsen entered instead of Mahmoud Wahid.

In the 51st minute of the game, striker Mohamed Sherif had a clear chance to double the score but he preferred to pass the ball instead of shooting it into the net.

Komsan used his bench again in the 72nd minute when Hossam Hassan entered the game instead of Sherif.

Hassan didn’t wait for long to impact the game, as he was able to double the lead for the Reds after receiving a brilliant ground pass from Afsha. Hassan received the ball and shot it straight into the net.

In the 94th minute of the game, Komsan used his bench for the last time, as he brought veteran Walid Soliman instead of Afsha into the match.

In the dying seconds of the game, Ramadan Sobhy was able to reduce the gap after scoring the first goal for Pyramids in the game from the penalty spot.

The referee then blew his full-time whistle to send the Reds to the semi-finals of the Egyptian Cup.

Al-Ahly will face Smouha in the Egyptian Premier League on Wednesday in Alexandria.

“We played very well against Pyramids. At the beginning of the game, we depended more on counter-attacks. However, in the second half we changed our style of play,” Komsan said after the match.

“It is very important to defend well in order to win games and we managed to be good both defensively and offensively during the game.

“We’ve been talking over the past period on the importance of pushing through this tough period by having great results,” he added according to the club official website.

“Of course, the amount of games which we play in a short time period affects us both mentally and physically. That’s why it was important to win.

“Amr El-Soulia is one of the dedicated and committed players in the team. He’s very important for us. Of course, he might feel tired at times but that doesn’t mean that he’s not beneficial for the team,” the interim head coach concluded.

“Despite having a lot of absences yet we were able to qualify to the next round. That’s Al-Ahly’s spirit. No matter what we face, yet we only have one goal ahead of us and that goal is to win,” Sayed Abdelhafiz, the club’s director of football said.

Every player in the team is very important, even our youth players in the squad. Yes, they are still developing but they are part of the first team.

“They are now seen as part of the senior squad and they have to understand the responsibilities and duties that come within that role.

As for the news that came out in the past hours regarding an agreement between Al Ahly and a new coach, I have to say that it’s not part of our role and our players are experienced enough to focus only on the pitch,” Abdelhafiz added.