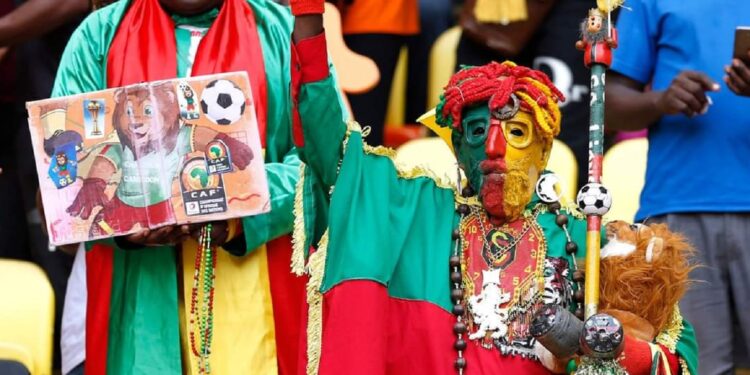 Cameroon's supporters during the African Cup of Nations Group A match against Ethiopia at the Ahmadou Ahidjo stadium in Yaounde.

YAOUNDE – Indomitable Lions of Cameroon became the first team to book their place in the knockout stage of the African Cup of Nations Cameroon 2021 following their 4-1 thrashing of Ethiopia Thursday at Olembe Stadium in Yaounde.

Hassane Bande chested home the ball six minutes before halftime to give Burkina Faso a 1-0 win over the Cape Verde Islands in Group A also on Thursday in AFCON 2021.

Hosts Cameroon overcame another hesitant start to crush Ethiopia and advance to the next stage of the AFCON with their second successive Group A victory.

Captain Vincent Aboubakar and strike partner Toko Ekambi each scored a brace after Dawa Dukele had given Ethiopia the lead.

Cameroon raised their tally to six points to secure their Round of 16 spot, while Ethiopia remained pointless after two games.

The Waliya Antelopes broke the deadlock inside four minutes through a Dawa Dukele who finished a sweeping counter.

The Ethiopians won possession inside their area breaking into the Indomitable Lions half with Abubeker Nasir playing in Amanuael Aregawi whose cut back found Dawa Dukele slot past Onana.

As in their opening match Cameroon came from behind to win it this time through Karl Ekambi who headed Collins Fai’s brilliant cross.

The Indomitable Lions continued to put more men forward as they look for the lead at the Olembe Stadium.

Martin Hongla and Maxi Choupo-Moting all came close for Cameroon both troubled Balcha in the Ethiopia goal.

Moumi Ngamaleu had the ball in the Ethiopian goal, but he was flagged offside on the half hour mark. Marauding right back Collins Fai placed an inviting cross into the area only for Seyoum to head over his goal for a corner.

The Indomitable Lions crashed the Waliya Antelopes post through Ekambi five minutes before the break whiles Onana produced a brilliant low two handed save to deny Surafel Dagnachew on the stroke of halftime.

The second-half saw both sides going all out for the winner but it was Cameroon who found the back of the net on 53 minutes through captain Aboubakar. 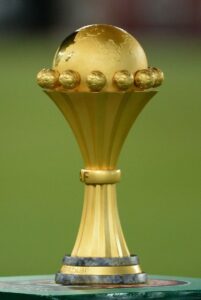 The former FC Porto man headed down Collins Fai’s delightful cross past the helpless Balcha to make it 2-1.

Aboubakar doubled his tally just after the restart with a poachers finish from Moumi Ngamaleu’s neat square ball for his fourth of the tournament.

Ekambi curled a cracking effort towards the far corner forcing a save from Balcha before the hour mark before scoring the the winner on 67 minutes.

Midfielder Anguissa and right back Collins Fai both saw their goal bound efforts came off the Ethiopian post whiles Mekengo failed to convert for the Waliya Antelopes late on.

The Indomitable Lions have now recorded back-to-back wins ahead of their last match against Cape Verde.

Burkina Faso forward Boureima Bande scored with his chest to help the Stallions beat Cape Verde in Group A.

The 23-year old was on hand to guide home Issa Kabore’s delivery with his chest into the unguarded Cape Verdean goal six minutes before the break.

The Stallions who lost their opening match to hosts Cameroon came into the West African derby without captain Bertrand Traore, who tested positive for Covid-19.

Gustavo Sangare who scored the tournament’s first goal came close to adding to his tally but the enterprising midfielder failed to beat Josimar Dias inside four minutes.

Dias pulled a smart save to deny Tapsoboa on 12 minutes, the midfielder released fierce low drive from a set piece towards the far corner.

The Blue Sharks grew into the match with a string of neat passes but failed to trouble the compose Koffi. Kenny Rocha’s speculative effort was easily dealt with by Koffi.

Burkina Faso created some openings and came close midway through the first half through goal scorer Bande. The strong striker hassled Lopes before firing straight at the advancing Dias.

Dias was called to action this entire making a routine save from Gustavo Sangare’s ambitious toe-poked effort inside the area.

Cape Verde missed a great opportunity to break the deadlock on the half hour mark in Yaoundé. Talisman Julio Tavares saw his effort saved by Koffi who showed leadership throughout.

Bande scored his dream goal with his chest from to give Burkina Faso an important win to rekindle their chances of making the knockout stages.

The two sides created chances in the second half but lacked the cutting edge.

Burkina Faso now move to second place level on points with Cape Verde, three behind hosts Cameroon who have booked their place in the last 16 with a 4-1 victory over bottom place Ethiopia.