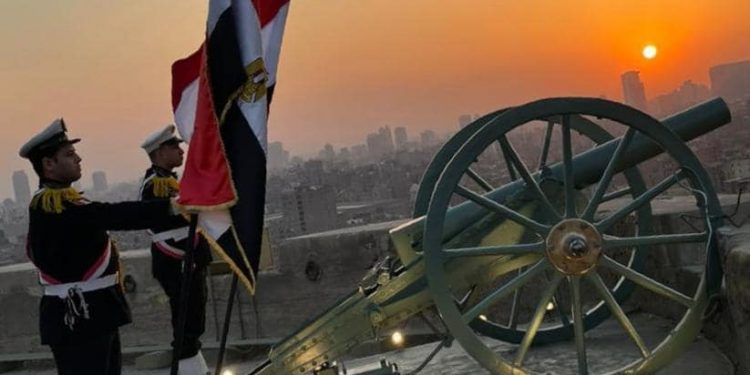 After nearly 30 years of silence, the centuries-old Midfaa Al-Iftar or Ramadan Cannon, placed on the Cairo’s historic Salah El-Din citadel, is fired again coinciding with the start of the Islamic holy month of Ramadan, which started in Egypt and most Muslim countries Tuesday.

The cannon, last fired in 1992, underwent a restoration as part of the Ministry of Tourism and Antiquities plan to develop archaeological sites, a senior ministry official said.

Iman Zidan, Assistant Minister of Tourism and Antiquities for the Development of Museums and Archaeological Sites, explained that the cannon restoration work came within the framework of the ministry’s plan to improve tourism services in museums and archaeological sites, including in the Salah El-Din citadel.

She pointed out that the cannon is scheduled to be fired every day throughout the month of Ramadan at sunrise and sunset to mark the beginning and end of daily fasting and to keep the archaeological heritage of the castle alive. A laser beam will be launched close to the cannon.

According to Dr. Osama Talaat, head of the Islamic, Coptic, and Jewish Antiquities Sector, “there were several anecdotes on the truth of the story of Ramadan cannon,” but all of them confirm that it originated in the city of Cairo, specifically in Salah al-Din Citadel.”

The closest story reveals that the Ramadan cannon began during the Burji Mamluk era in the 15th century, during the reign of Sultan Kho Shoqdum. The sultan decided to test one of his cannons, which he had brought from Germany, around sunset on the first day of Ramadan and the people mistakenly believed he had deliberately scheduled the event to mark iftar. They went to his palace in the citadel and thanked him. therefore, he decided to fire the cannon throughout the holy month.