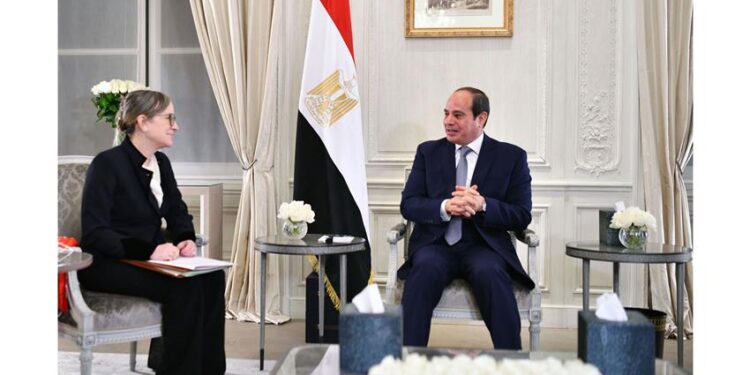 During his meeting with Tunisian Prime Minister Najla Bouden on the sidelines of the Paris International Conference on Libya, Sisi asked Bouden to convey his greetings to Saied, congratulating Bouden on being the first woman to be a prime minister in the Arab world.

President Sisi wished that the Tunisian government would overcome the current challenges the country faces, saying Egypt is ready for offering all the possible capabilities to Tunisia and developing bilateral cooperation.

Meanwhile, Bouden conveyed Saied’s greetings to Sisi, expressing her appreciation for Egypt’s support to Tunisia and its vital role in maintaining stability and security in the Arab and African regions.

Hailing the close relations, the Tunisian prime minister pointed out that her country is keen on benefitting from the Egyptian experience under Sisi.

The meeting touched on boosting communication between the two countries at the political and security levels as well as exchanging information on combating terrorism and extremist thought.

They tackled a number of regional issues of common interest, especially the situation in Libya and the Grand Ethiopian Renaissance Dam (GERD). In this regard, Sisi appreciated Tunisia’s support to the Egyptian stance toward reaching a legal binding deal.