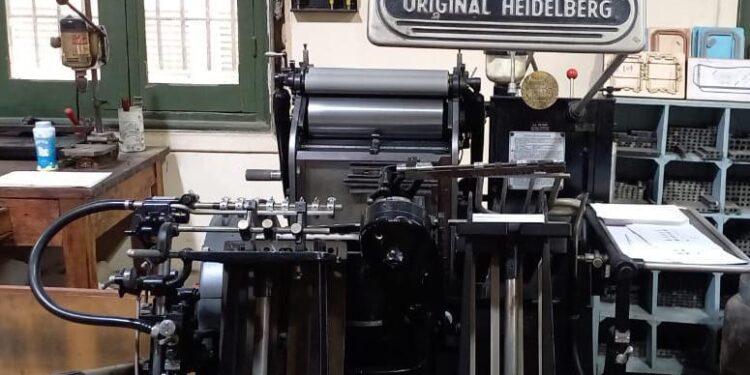 Ancient Egypt has known the hieroglyphs as the main language. Some may think that it is not used nowadays, but the French Institute of Oriental Archeology in Cairo or Institut français d’archéologie orientale (IFAO) has restored it.

Over 100 years in the Mounira Palace, the hieroglyph printing house settles down there till now.

Once people enter the place, they could feel the machine’s temperature, breathe lead’s harsh smell and hear the machines’ noisy sound.

In 1880, Émile Chassinat (1868-1948), a French Egyptologist, established IFAO.  It is a continuing mission to study the successive civilisations in Egypt from prehistory to contemporary history.

In the past, scholars used to discover new characters and stories on the temples and walls. Then, they transformed them into hand-written books. At that early age, the books were sent to France to be printed. So, Chassinat exerted all his efforts to establish a publishing house here in Egypt.

“Chassinat was fascinated by hieroglyphs since he was young. He was an Egyptologist at the national printing house in France and was able to launch another house here in Egypt,” Lilian Amin, who is responsible for the hieroglyph printing press at the French Institute of Oriental Archeology, told the Egyptian Mail.

Chassinat brought Foucher machine to Egypt. He started by only three machines, Foucher, Prova and Printer.

Foucher is a hot metal press that melts lead at 350 C. Then, the melted lead faces the copper piece to come out in the form of hieroglyph symbol.

After that, the staff begins with incredible efforts to gather the page letter by letter and symbol by symbol laterally inverted.

When the page is completed, it passes through the Prova machine to make sure that every single word is correct.

Every page on the book passes through these steps, so one book takes great efforts.

These massive machines in Egypt have enabled the scholars to print many books quicker and more easily than before.

Amin said that Chassinat was drawing by his hand over 700 characters. He gathered the hieroglyphs character in one catalogue called “Catalogue des signes hiéroglyphiques de l’imprimerie de l’Institut français du Caire”. The first one was published in 1907 and then 1912, 1915 and 1930.

By the industrial revolution, two machines were added to the others in IFAO. They called Mono-type and Heidelberg.

Monotype is operated using a keyboard to write English, French and Arabic. It also gathers the letters back-to-front while the Heidelberg has been used in printing without any need for manual operation.

Hieroglyph printing house stopped for 30 years with the advancement of the digital printing.

“Through these 30 years, the printing house was just a museum,” Amin told The Mail.

In 2020, due to the coronavirus pandemic, the whole world had to stop its activity, but on the other hand IFAO decided to restore its greatness.

Mathieu Gousse, Publishing Director at IFAO, said that he decided to restore the machine because they were in the time of coronavirus and had more time to think about the machine.

He added that the machine is the big heritage of IFAO and the best way to care about machines is to use them.

The new staff after 30 years did not definitely know how to use these ancient machines.

So, they called back the retired men to train the staff.

Amin said that it took them a lot of work, patience and training, trying to understand the machine and finally they restored it back.

A great effort had done by both of new and old staff, especially the trainer Hany Mouwad; the one who opened the machine up and set it in pieces to understand the capacity of each part of this machine and finally it worked.

“The impressive thing was the first letter of the machine. It was “Key of Life” as if the machine sends us and the whole world a message of life in the period of coronavirus,” Amin said.