‘Stories should come from the heart’ – US screenwriter Trey Ellis 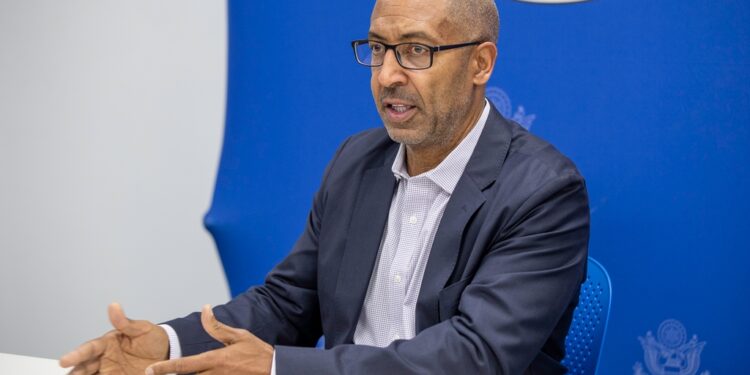 It is true that stories are everywhere, but only those stories that touch you are worth telling. That’s what US novelist, filmmaker and screenwriter Trey Ellis believes.

“If we just told the same old story that everybody knew, or even just a history without heart, it wouldn’t be worth telling, so I think good stories — It’s cliché to say that they come from the heart — but it really needs to be vitally important to the filmmaker to tell the story,” Ellis told The Egyptian Mail .

Trey Ellis is an American Book Award Winning novelist, Emmy and Peabody-winning filmmaker, playwright and Professor of Screenwriting in the Graduate School of Film at Columbia University.

Throughout his career, Ellis tries to make his characters vivid and look like real humans, not just like ideal icons.

In his 2018 movie King in the Wilderness, a documentary from HBO, directed by Peter Kunhardt, he tackles the final years of the life of Martin Luther King Jr.

“By humanising him in this very intimate portion of his life, our goal was to energise a new generation of activists and game changers. By showing that he was very human, it gives us the responsibility to take up his method of non-violent change,” Ellis explained.

“Imagine a film about George Washington when you saw that he wasn’t just crossing the Delaware, he wasn’t just being a general or president – but being a human being, how interesting that would be, so we are trying to do that in our movie about Martin Luther King,” he said.

Ellis’ documentary about Luther King is appealing even to people outside the US.

“Dr King’s movement began of course as a black movement for civil rights but his message progressed to be a more and more global message. He talked about segregation in the American south — that was the first fight, and then that fight moved to Chicago in the north of the United States — then at the end before his death he was trying to help the poor in America. He was saying that the fight for the underprivileged is a global fight, so I think he just kept expanding his vision to encompass the whole world,” he said.

As a black writer who is keen on giving black people a voice in his works, Ellis believes that nowadays it is much better for black filmmakers to express themselves.

“When I began my career, there was really almost no appetite for black films in general in the United States. I was really relegated to stories of the poor. Which is something that’s not really my experience, luckily, I’ve lived long enough to watch that change so right now there probably never been a better time to be a filmmaker of color in the United States, it’s much better now,” he told this  newspaper.

As a writer, Ellis not only finds himself in writing for cinema, but also he writes for TV and Theatre.

When asked about what he enjoys the most in his career, Ellis said that he likes ‘wearing different hats’.

“I like writing everything. I’d like theatre because as soon as you write it, you start with actors and it becomes alive. With film and television — films can take years between when you write them to when they come on screen. Television is a little faster but it still takes some time — but I love them all. They all have their differences but I like wearing different hats so I like to change,” he said.

Ellis is visiting Egypt for his second time and finds his visit emotional.

“I was here in 1985. I just got to work in Italy. Then I decided to travel to Africa so I started in Egypt and then made my way around, all the way through Central Africa, Congo, Niger, Togo for about five months and I met amazing people. I’m proud of the fact that I’ve probably seen more African countries and I loved coming back here, 38 years later, it is very emotional,” he said.

Ellis is currently working on a new project, a TV show about the 1950s radio show called Amos ‘n’ Andy which was aired by two white men who pretend to be black actors.

“The show is very popular among black and white people because, but no one knew that until when the show was brought to Television, they were forced to cast black people to be in the story. The show was before I Love Lucy (1951) and it was as popular as I Love Lucy. So, I’m developing a TV show now about the story with Samuel L. Jackson,” he explained.