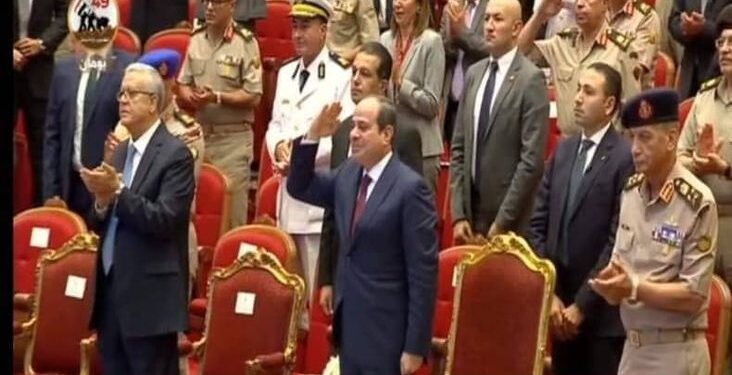 The symposium, titled “October..Will of Nation”, is held in the presence of Prime Minister Moustafa Madbouli, Defense Minister Mohamed Zaki and a number of ministers and senior state officials.

Proceedings of the 36th Cultural Symposium of the Armed Forces, held under the title of “October..Will of Nation”, started with a recitation of verses of the Holy Qur’an by Sheikh Ayman Aql.

After that, actress Heba Magdy presented a show under the rubric “Torch of Victory.”

“On the occasion marking the 49th anniversary of the October War victory, we will launch “Torch of Victory” which will be handed from one generation to another,” she said.

The torch will move until it reaches the Suez Canal in the area of the Ismailia memorial, which was the first venue to see the Egyptian flag raising on the eastern side of the canal in October War.

The torch will be illuminated until the next year to mark the celebration of the golden jubilee of October victory.

A documentary was then played showing achievements of the October War heroes, including El Sa’aqa Forces, who were first to cross the Canal and first to initiate the fight and end it.

The documentary focused on Battalion 139, who stood up as human shields against Israeli tanks and prevented their advancement towards Ismailia during the crossing of Egyptian troops.

The battalion nipped in the bud any hopes for the Israeli troops to enter Ismailia after an articulated battle that occurred between October 19 and October 23, 1973. Israel calls it the “Mango Fields” battle, but in Egypt it is the “Abu Attwa” battle.

During the ceremony, popular Egyptian singer Sherine Abdel Wahab and child Mohamed Osama performed a song to mark the 49th anniversary of the October War victory.

The song shed light on the beloved land of Sinai and the heroes who courageously fought and died, sacrificing their soul and blood for the sake of homeland.

Another documentary film was shown during the 36th Cultural Symposium of the Armed Forces.

The film also shed light on the social life and the difficulties faced by the Egyptian nation during the October war.

Bedir said that the situation nowadays is far better than previous years, given the mammoth projects which are currently being implemented in the country.

Kamal Abu Raiya, meanwhile, said that there was a state of despair in the past in the cities of the Canal and in all the governorates of Egypt.

The October war victory came after endurance and steadfastness of the heroes and the unity of people and army, he went on to say.

An artistic performance was held on the tunes of national songs related to October war.

Meanwhile, actor Ahmed Fouad Selim gave an introduction in preparation for presenting a documentary film about “Our will is the history”.

The film drew attention to the difficult conditions which took place in the country during October war along with the economic and political conditions during this period.