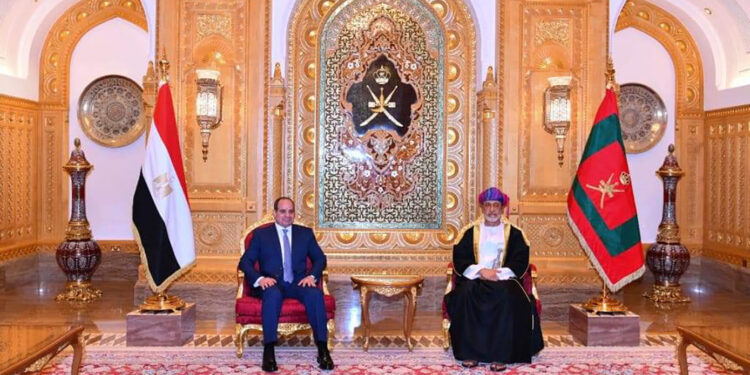 PRESIDENT Abdel Fattah El Sisi flew in to Muscat on Monday, beginning a two-day official visit to the Sultanate of Oman, the first stop in a tour that will take him also to Bahrain.

Sultan Haitham bin Tareq received and welcomed President Sisi upon arrival at Muscat’s Sultanic Airport and escorted him to the al-Alam Palace where official reception ceremonies were held, the Omani News Agency reported.

Following the official welcome ceremony, the two leaders held an expanded session of talks with senior officials from the two sides. In remarks during the session, President Sisi emphasised that Egypt cherishes the deep and solid strategic relations with Oman, Presidency Spokesman Ambassador Bassam Radi said.

In this regard, President Sisi expressed Egypt’s eagerness to consolidate and diversify the frameworks for co-operation with Oman and explore the mechanisms that can push such co-operation forward to wider horizons in all political, security, economic and trade fields, Spokesman Radi said.

President Sisi also voiced high valuation of the level of existing coordination between the two countries and oneness of their visions on issues of mutual interest as well as on regional and international issues, Spokesman Radi said.

For his part, Sultan Haitham paid tribute to the close and brotherly relations that bind the two countries and expressed appreciation of Egypt’s support to Oman at all levels, referring in this connection to the Egyptian community’s contribution to various developmental activities in the Sultanate, Spokesman Radi said.

Sultan Haitham then stressed his country’s keenness to consolidate co-operation with Egypt, including through increasing Omani investments in Egypt in light of the existing opportunities for investment in Egypt, the spokesman said.

The joint committee’s accomplishments have included the co-signing of several Memoranda of Understanding (MoUs) and programmes for co-operation in various economic, trade and investment fields.

Egyptian companies operating investments in the Sultanate of Oman numbered 744 in 2020, with capital investments estimated at more than $1.8 billion, according to the same report.

Reflecting the growth of economic relations between Egypt and Oman is the increase in the number of direct flights between Muscat and both Cairo and Alexandria, carrying passengers for tourism and work purposes.

The Egyptian leader’s talks in both Muscat and Manama would also include enhancing co-operation and coordination on various regional and international issues of common interest, the spokesman said.