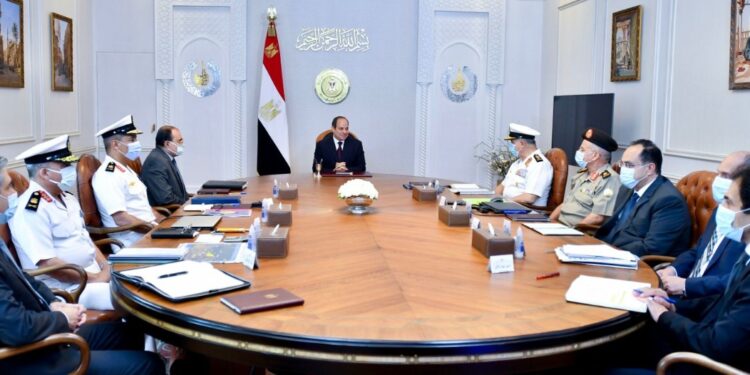 President Sisi made these directives during his meeting with Lieutenant-General Ahmed Khaled, commander of the strategic command and supervisor of military industrialisation, and President’s Adviser for Urban Planning Major General Amir Sayed Ahmed.

Vice-President of the Engineering Authority of the Armed Forces, Major General Ahmed Al-Azzazi, and Assistant Commander of Naval Forces for Engineering Affairs,Mohamed Fikri attended the meeting, together with Ismail Shaker al-Marqabi, Chairman of the Shaker Consultancy Group and Board Chairman of Gharably Integrated Engineering Company, Moatassem el-Gharably.

During the meeting, the president called for scrutinizing studies on the phenomenon of beach erosion in order to preserve the safety of coastal urban communities in a bid to reinvigorate investments in these areas, Radi said.

The president was briefed on coast development and protection projects, especially in Alexandria and the North Coast, the presidential spokesman added.

These projects, which extend from the Abu Qir area to the northwestern coast, are part from the government’s comprehensive plan to develop beaches, with the chief aim of maximising the benefit from state resources, notably the unique nature of the Egyptian coasts on the Mediterranean Sea, Ambassador Radi in his roundup of the meeting