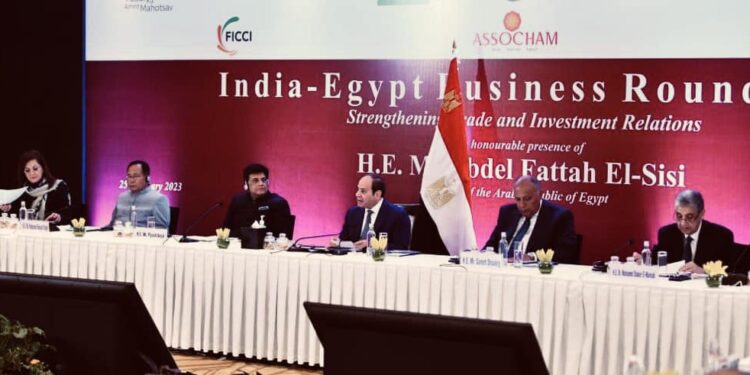 Indian Minister of Commerce and Industry Shri Piyush Goyal attended the meeting, together with a number of senior Indian officials and representatives of various government agencies and major unions.

During the meeting, President Sisi expressed his appreciation to meeting members of the business and trade community in India, which embodies the spirit of distinguished co-operation between the two countries, Presidency Spokesman Ambassador Bassam Radi said.

The president stressed Egypt’s keenness to further develop economic and trade co-operation with Indian companies. He said he looks forward to increasing joint investments between Cairo and New Delhi to best serve the interests of the two countries and their peoples.

President Sisi praised the positive developments in the economic and trade relations between the two countries during the past period, noting in this regard the various investment opportunities that are available in mega projects being implemented in Egypt.

These projects included the development axis of the Suez Canal region, which encompasses a number of major industrial estates and logistical zones. This provides promising opportunities for Indian companies wishing to benefit from Egypt’s strategic location as a main hub for trade and re-export of products to various countries of the world.

He said that Egypt had signed a series of free trade agreements with a number of Arab and African countries, according to the presidency spokesman.

President Sisi underscored the resilience of the Egyptian economy in various development sectors. He said that this reflects the strong will of the Egyptians to achieve sustainable and comprehensive development despite the global economic crunch, Radi said.

The president said that the unique friendship between the two countries is the real umbrella to support efforts to develop cooperation in various economic and trade fields.

President Sisi said Egypt is willing to achieve industrial integration with Indian companies to enhance their growth in the region through the establishment of successful partnerships based on the localisation of industries.

For their part, the Indian minister of commerce and businessmen expressed their happiness at meeting President Sisi at this important event.

The Egyptian-Indian business round table represents a great opportunity to strengthen the bonds of friendship between the two countries, they said, stressing their aspiration to open new vistas of co-operation in several promising investment fields, especially in the sectors of pharmaceutical industries, communications and information technology, defence industries, infrastructure, petroleum and natural gas, electricity, and new and renewable energy.

The Indian businesspeople said that they will make the best use of the advantages granted by the Suez Canal Economic Zone. They noted that they will work on pushing forward trade exchange between the two countries in agricultural products, Ambassador Radi said.

The Indian investors and capital owners also praised the president’s close and periodic personal follow-up on the measures taken to facilitate the work of Indian companies in Egypt. They also hailed the remarkable resilience of the Egyptian economy, which is able to overcome global crises.

They cited the implementation of several mega national projects, making Egypt an important development partner to India on the international arena.

In this regard, they stressed the importance of strengthening communication between representatives of the private sector in the two countries to encourage leading Indian companies to enhance their investments and explore new opportunities.

They said that they were looking forward to pushing bilateral economic and trade relations to broader horizons that reflect the aspirations of the two peoples.