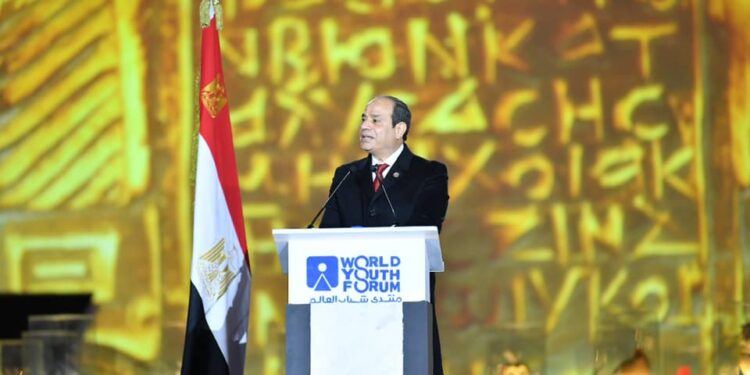 They also witnessed the launching of the Reviving Humanity Memorial in Sharm el Sheikh. 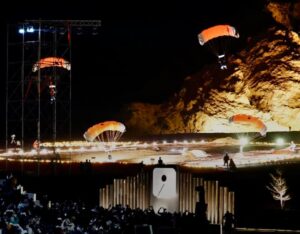 President Sisi has watched a parachute show, which carried the Egyptian flag and banners reading “long live Egypt”. The parachutes set off fireworks that decorated the sky of the celebration.

A film was then screened which displayed sculptures carved by artists from around the globe.

A documentary was also screened, which featured the idea of establishing a memorial to revive humanity. 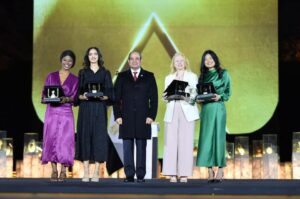 A number of women cast in a documentary about a woman who experienced bullying thanked the president for giving them the opportunity to take part in the forum.

The president also attended shows presented by a group of bands and artists. During a concert, the sky above was decorated with dazzling shows featuring shapes expressing peace and collaboration.

In his speech at the closing ceremony of the forum, the president praised the organization of the event which came out in such a representable way. 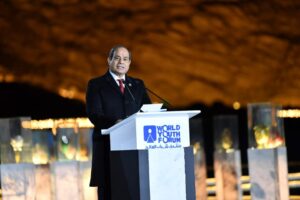 President Sisi said that the situation caused by the coronavirus pandemic in the world imposed itself on the agenda of the forum in light of questions on the fate of the world and its future in terms of being affected by the pandemic.

Speaking at the closing ceremony of the World Youth Forum (WYF), the president said the forum has become an important dialogue platform. “It is a purely Egyptian idea.”

Sisi called for effectively working on developing this platform and converting its recommendations into actions.
A number of women cast in a documentary about a woman who experienced bullying thanked the president 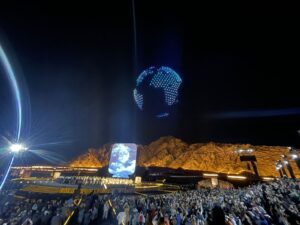 for giving them the opportunity to take part in the forum.

At the end of the closing ceremony, President Sisi asked the participants at the World Youth Forum to chant “long live Egypt”, “long live humanity” and “long live world youth”.