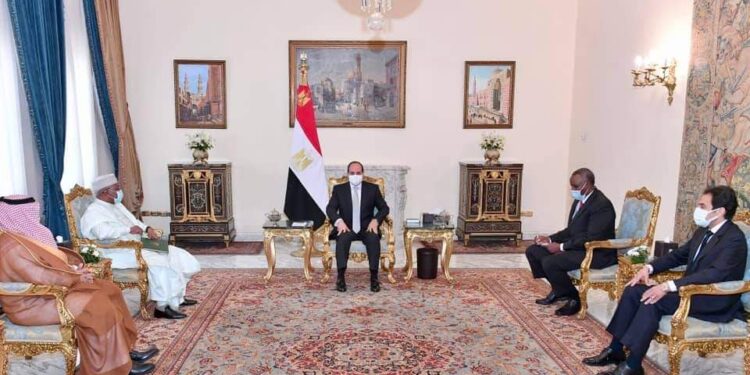 CAIRO – Egypt’s President Abdel Fattah El Sisi said Tuesday that he is looking forward to enhancing the work of the Organisation of Islamic Co-operation (OIC) through investing Egypt’s prestigious Islamic institutions which have credibility at the regional and international levels.

These remarks were made by President Sisi during his meeting earlier in the day with OIC Secretary General Hussein Ibrahim Taha, Presidential Spokesman Bassam Radi said.

During the meeting, Sisi welcomed the visit of the new OIC secretary general to Cairo, asserting Egypt’s full backing to his mission taking into consideration the huge challenges facing the Islamic world at all levels, a matter which necessitated enhancing coordination and interaction under the umbrella of the OIC in the service of the Islamic nations, the spokesman added.

Meanwhile, the OIC secretary general said he was honored with meeting President Sisi as he briefed him on the programme and plan of action of OIC in the coming phase, the spokesman explained.

He said he was keen on briefing President Sisi on his visions and thoughts regarding the issues floated in the Islamic world at the beginning of his mission as OIC chief with the aim of further promoting joint Islamic action among member states and to protect the common interests of their peoples.

The meeting also reviewed the latest developments regarding a number of regional crises as the OIC chief praised Egypt’s efforts aimed at reaching political settlement to a number of crises in the region that has recently been engulfed with various tensions and challenges topped by terrorism.