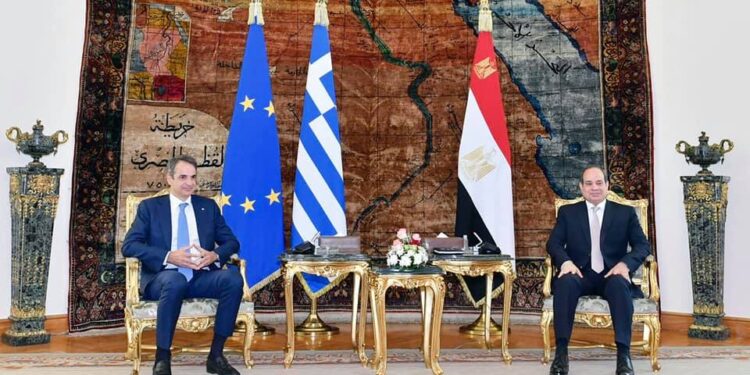 President Abdel Fattah El Sisi said Monday that Egypt is always keen on exchanging views with Greece over means of strengthening their bilateral relations in all fields.

He added following a meeting in Cairo with visiting Greek Prime Minister Kyriakos Mitsotakis that Egypt is also always keen on consulting with the Mediterranean state on regional and international issues of mutual interest.

“As you know, Egypt and Greece are bound together with a deeply-rooted friendship,” President Sisi said. “Communication between the ancient Egyptian civilization and the Greek civilization started around 3,000 years ago, making great contributions to humanity over the ages.”

The Egyptian leader noted that Cairo and Athens co-operated and coordinated together over a large number of issues at the political, economic and military levels in the past years.

This happened, he said, at the bilateral level and at the level of the trilateral co-operation mechanism which also includes Cyprus.

President Sisi said this close coordination with Greece made relations between Cairo and Athens a regional model to emulate.

We agreed, he said, on making a quantum leap in all aspects of relations between our two countries.

We will also work to resume the movement of tourist cruise ships between our two countries as soon as possible, the Egyptian leader said.

I emphasized to Prime Minister Mitsotakis Egypt’s unwavering position on the situation in the East Mediterranean region, one based on the importance for all countries to demonstrate respect for international law and the United Nations charter, President Sisi said.

He said this was especially true to the principle of non-interference in the internal affairs of regional states and respect for the sovereignty of states over their territorial waters.

Egypt stands in solidarity with Greece against practices that impinge on its sovereignty, the Egyptian leader said.

He added that he and Prime Minister Mitsotakis also agreed to enhance the trilateral co-operation mechanism with Cyprus to maintain political coordination and technical co-operation.

We have to achieve maximum benefit, he said, from this mechanism which binds our three countries together, President Sisi said.

He said this has to be done in the light of the distinguished nature of relations between the three countries and the existence of many shared interests on the road to achieving regional security and stability.

President Sisi noted that his talks with Prime Minister Mitsotakis also dwelt on developments on the Palestinian cause.

I highlighted the importance of the presence of concerted international efforts to offer the necessary support to the Gaza Strip which was deeply affected by the latest Israeli attacks, the president said.

He added that he also underscored the importance of taking the Egyptian initiative for the reconstruction of Gaza into account, noting that the initiative would be implemented in full coordination with the Palestinian Authority.

We also need to work to bring the Palestinians and the Israelis back to the negotiating table on the road to reaching a final settlement [to the Palestinian-Israeli conflict] in the light of international legitimacy resolutions, the Egyptian leader said.

He added that he and Prime Minister Mitsotakis also discussed the latest developments on the Libyan scene.

We agreed, he said, on supporting our Libyan brothers on the road to holding elections by the end of this year.

We also agreed to work to remove any obstacles to holding the elections according to schedule, President Sisi said.

He added that he and Prime Minister Mitsotakis also agreed on the need for all foreign troops and mercenaries to get out of Libya without any “procrastination” and disbanding all militias to ensure the return of Libya to its people and the return of the country’s sovereignty over all its territories.

The president added that he also notified Prime Minister Mitsotakis about the results of negotiations over Ethiopia’s Nile dam.

The president noted that he underscored the importance of reaching a legally-binding deal on the filling and operation of the Ethiopian dam.

I also clarified the importance of the international community playing a serious role in this file for the sake of the stability of the region, President Sisi said. 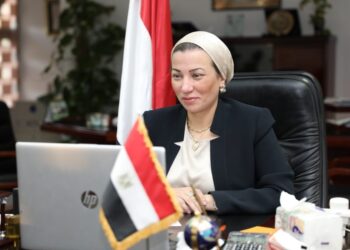