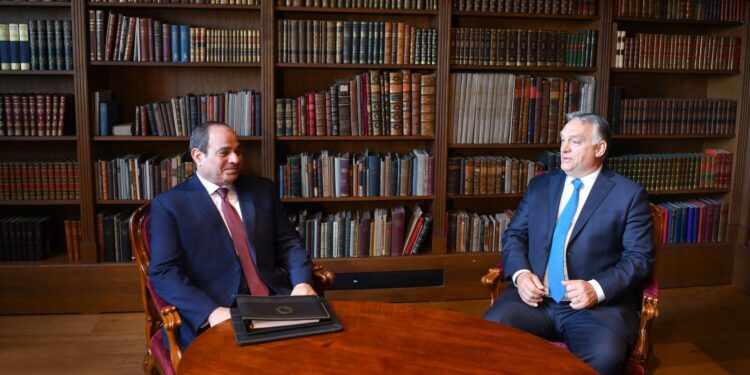 Egypt is keen to benefit from the technological expertise of “our friends in Hungary”, President Sisi said.

He voiced gratitude for Orbán’s continued support for Cairo, noting that the Hungarian premier was confident Egypt could overcome the difficult circumstances since 2011.

He also thanked Orbán for his support for Egypt that began early since 2011 and for his trust that Egypt would be able to bounce back.

President Sisi assured the Hungarian premier that the situation in Egypt has now greatly improved at all levels.

He praised the strength of the long-standing relations between Cairo and Budapest, describing them as historic and deeply rooted.

The president voiced Egypt’s interest in pushing these relations ahead to new highs.

He stressed the importance of coordination and political consultation between the two countries on issues of mutual concern to the peoples of both countries.

The president thanked Orbán for inviting Egypt to attend the summit of the Visegrád Group for the second time.

President Sisi spoke highly of achievements made in Egypt over the past few years.

Sisi invited Orbán to visit Cairo when the New Administrative Capital (NAC)  is inaugurated so he sees for himself the extent of achievements in the country, as this inauguration would be a “declaration of a new republic” after difficult years.

President Sisi said he was happy to meet Orbán and praised his “wise” leadership of Hungary.

For his part, the Hungarian prime minister commended the remarkable development taking place in Egypt in recent years.

Orban said that his country was looking forward to enhancing mutual investments with Egypt in various sectors and maximising the volume of trade between the two friendly countries.

Orban went on to say that his country wants to make a qualitative leap in the Egyptian-Hungarian economic ties, through the participation of Hungarian companies in the implementation of giant national projects in Egypt.

With regard to co-operation between the two countries within the framework of the Visegrad Group, President Sisi praised the results of the summit held on Tuesday between Egypt and the countries of the group, stressing that Egypt hopes the current Hungarian presidency of the Group will witness tangible developments in various fields of co-operation between the two countries, in light of the deep experiences the countries of the group enjoy in several domains.

Talks also touched on the latest developments in regional and international issues of common interest.

The Hungarian prime minister praised the positive role played by Egypt in the political settlement of all existing crises in the entire Middle East region, as well as its efforts to strengthen the bridges of dialogue between African, Arab and European countries. 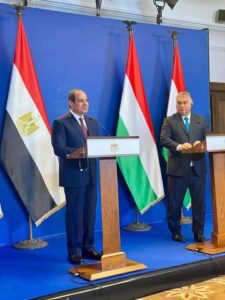 He also appreciated Cairo’s relentless efforts to combat extremist ideology and establish principles and values ​​of acceptance of others.

During the meeting, the two leaders shared identical views regarding the Middle East peace process.

In this connection, Orban praised the recent Egyptian moves in this issue at the highest level, as well as the strenuous Egyptian efforts to consolidate ceasefire between the Israelis and the Palestinians.

He also appraised Egypt’s initiative for the reconstruction of Gaza Strip and stressed the importance of working together to intensify international efforts with a view to resuming negotiations between the two sides, in an effort to settle the Palestinian crisis based on the resolutions of international legitimacy.

During the meeting, the developments of the Grand Ethiopian Renaissance Dam (GERD) issue were also discussed in light of the issuance of the last presidential statement of the Security Council, urging the parties concerned to reach a legally binding agreement for filling and operating the dam in a way that achieves the common interests of Egypt, Sudan and Ethiopia, according to Ambassador Radi.

President Sisi stressed Egypt’s commitment to the course of negotiations. He said that the international community has to play an influential role in resolving this very important issue that affects Egypt’s water interests.

Later in the day, President Sisi laid down a wreath of flowers on the memorial at the Heroes Square in Budapest, the presidency spokesman said. 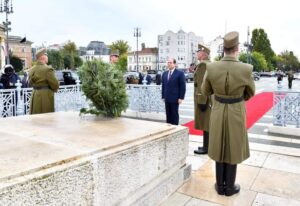