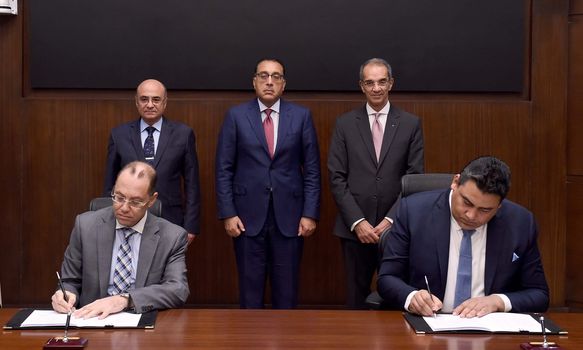 The Egyptian Prime Minister Moustafa Madbouli attended on Wednesday the signing of a co-operation protocol between Justice Ministry and Telecom Egypt at the government’s HQ in the New Administrative Capital.

The deal aims to offer notarial and documentation services through the company’s branches .

In statements following the signing ceremony, Madbouli said the protocol emanates from the state’s efforts to develop the system of notary offices, in accordance with President Abdel Fattah El Sisi’s directives.

Marwan said his ministry is exerting strenuous efforts in co-operation with different bodies concerned to make it easy for citizens who want to obtain public services, with special focus on documentation.

Under the protocol, citizens can receive notarial services through outlets of Telecom Egypt nationwide, he added.

In turn, Talaat said the protocol is part of painstaking and tireless efforts of the IT sector to achieve development leap on all walks of life.