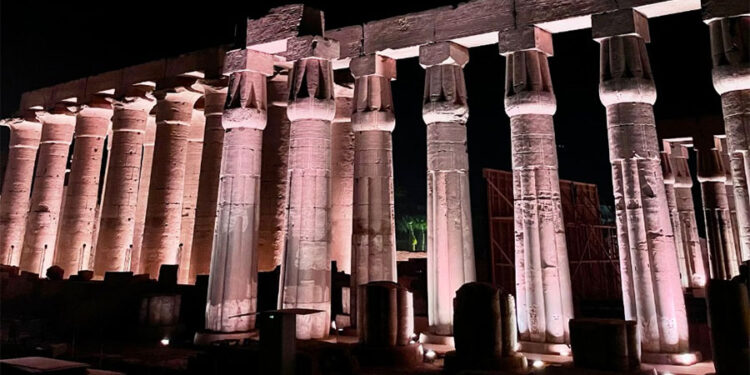 LUXOR – The residents of Luxor expressed their happiness on reopening Avenue of Sphinxes that links Temple of Luxor with Karnak Temple in an awe-inspiring international ceremony later on Thursday under the auspices of President Abdel Fattah El Sisi.

The residents said this event will promote tourism in the city as the world’s greatest open-air museum, thanking President Sisi for paying much attention to the city.

A taxi cap driver said tourism remarkably flourished in the city a month ago though the road was not opened yet.

A bazaar owner in Luxor market thanked President Sisi for paying attention to the city, adding that this event will change the tourist map of Egypt.

Head of Luxor city Tarek Lotfi said all the hotels in Luxor were 100 per cent booked a week ago for one month and half to come in an unprecedented event.

This is the second global event to take place in Egypt following the inauguration of the National Museum of Egyptian Civilisation with a spectacular Pharaohs’ Golden Parade that saw the transferring of 22 mummies from the Egyptian Museum in Tahrir to their new home.

The Avenue of the Sphinxes stretches 2,700 metres between the ancient Karnak and Luxor temples with hundreds of ram-headed statues, and sphinxes statues on both sides.

The event reflects President Abdel Fattah El Sisi’s keenness on highlighting the richness and glory of Egypt’s ancient civilisation in tandem with his keenness on carrying out mega national projects across the country.

The King’s Festivities Road dates back to 5,000 years ago.

The road was built for the purpose of witnessing the annual celebrations of the Opet Festival, feasts and special occasions, as well as the coronation of kings, with processions that extended from Karnak Temples to Luxor Temple.

The King’s Festivities Road hosts statues of the Great Sphinx or rams along its length of 2,700 metres from the Luxor Temple to Karnak Temples. In the Pharaonic eras, the number of rams in the two rows was 1,300 rams, but currently there are only about 300 of the original rams. The rest of the rams were destroyed in the eras that followed the Pharaonic era.

However, the largest share of the road’s implementation was completed during the reign of King Nectanebo I, founder of the 30th Dynasty.

Rams in the road symbolise the god Amun that represents fertility of the ancient Egyptians, and the Ancient Egyptians called it “Wat-nTr”, meaning the Path of God. These statues were carved from a single block of sandstone with a cornice inscribed with the king’s name and title.

Today procession will start with a musical concert held under the leadership of maestro Nader Abbasi, who is also the music director. The music is composed by Ahmed El-Mougy and Abbasi.

The concert will be performed by the United Philharmonic Orchestra and Choir featuring the soloists Shahd Ezz in The First Call, Heidi Moussa in Hatshepsut, Ezz El-Ostoul in Amon Ra, and Wael El-Fashni in Luxor is Our Country.

Some 160 musicians are taking part in the event, in addition to dozens of professionals, technicians, Egyptologists, Hieroglyphics specialists, among others.