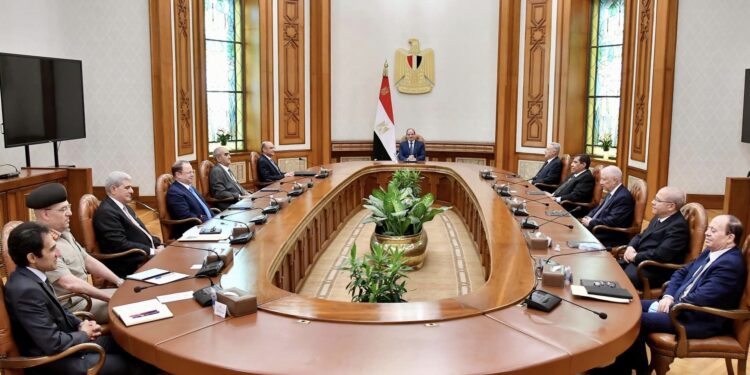 Egypt’s President Abdel Fattah El Sisi affirmed the great responsibility placed on the judiciary in upholding justice and attaining social peace and stability, which are considered a mainstay in advancing nations.

The State is keen on judiciary independence and non-interference in its affairs, added President Sisi during his meeting on Saturday with members of the Supreme Council for Judicial Bodies, with
Justice Minister Omar Marwan in attendance.

President Sisi, meanwhile, stressed the importance of developing the justice system to make it more effective and to ensure that court decisions are fast and fair in order to guarantee that rights of citizens are respected.

The meeting came within the framework of marking the Egyptian Judiciary Day, which is celebrated each year in appreciation of the great role played by the judicial institutions and bodies in entrenching and safeguarding the constitutional principles and upholding the rule of law, said Presidential Spokesman Bassam Rady.

Members of the Supreme Council for Judicial Bodies voiced appreciation for President Sisi’s keenness on meeting with them to mark the Egyptian Judiciary Day, added the spokesman.

They also pointed out to the great attention paid by the State to the judiciary, according to the spokesman.

The spokesman further said that they reviewed the procedures taken to swiftly resolve cases in order to enhance the delivery of justice.

The judiciary, during the era of President Sisi, witnessed unprecedented attention, said the justice minister.