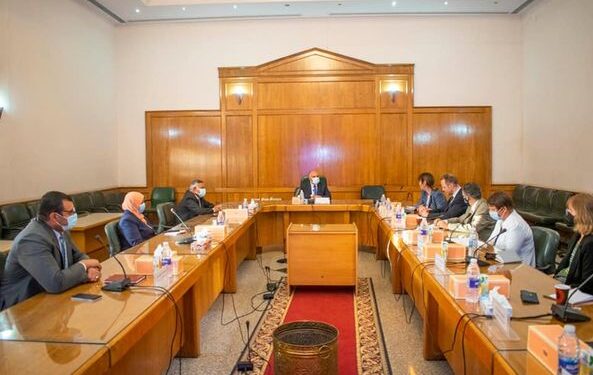 Minister of Irrigation and Water Resources Mohamed Abdel Aati during his meeting with a delegation of international organisations operating in the field of water resources management.

CAIRO- Egyptian Minister of Irrigation and Water Resources Mohamed Abdel Aati asserted that Egypt’s renewable water resources are limited and mostly depending on the River Nile in addition to very limited amounts of rains and underground water in the deserts.

These remarks were made by the minister during his meeting with a delegation of international organisations operating in the field of water resources management. The delegation is chaired by United Nations Resident Coordinator in Egypt Elena Panova and Deputy Resident Representative of the United Nations Development Programme (UNDP) Silvan Merlin along with representatives of the European Union, the embassies of the US, UK, Germany, the Netherlands and Finland.

The meeting covered strategies and plans for water management till 2050 and means of countering the negative impact of climate change on various world countries.

During the meeting, the minister reviewed the negative effect of climate change on the water sector and Egyptian coasts, a matter which forced the State to launch a set of important projects to limit the hazards of torrential rains and protect the Egyptian coasts and key facilities.

Abdel Aati also briefed the delegation on the developments regarding the Nile water issue and special negotiations over the Ethiopian Grand Renaissance Dam, noting that 94 per cent of Ethiopian territories are green as the amounts of rains falling on it reach more than 935 billion cubic metres annually.

In Egypt, only four per cent of its territories are green, the minister said, explaining that Ethiopia has availability of both the green and blue water coming from the Ethiopian Heights, while the quotas of Sudan and Egypt reach up to 84 billion cubic metres annually.

The minister stressed that Egypt is keen on resuming the negotiations regarding the dam issue along with maintaining its rights to preserve its quotas of water.

The delegation of international organisations paid a visit to Kafr El Sheikh governorate where they have been briefed on the experiment of the Water Resources Ministry to cope up with climate change. They inspected a number of projects in the fields of rehabilitation of canals, modern irrigation systems as well as protection of coasts.

The delegation praised the projects carried out by the ministry and noted that such projects would enhance the water systems efficiency in handling climate change.