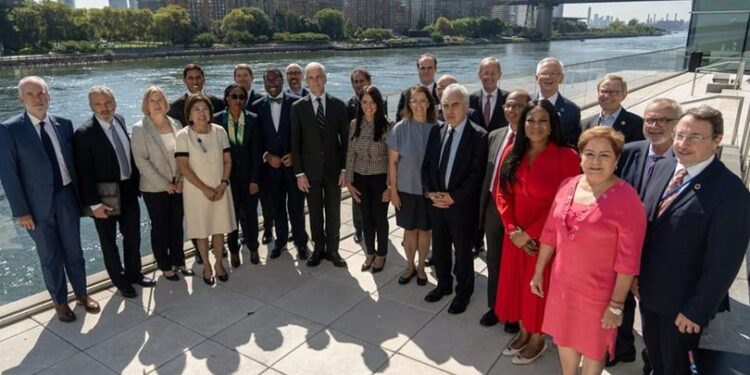 Egypt’s Minister of International Co-operation Rania el-Mashaat was present on Thursday at a roundtable, ‘Progress Shaping an Africa-Led Just Energy Transition’, organised by the Sustainable Energy for All (SEforALL)  as part of the 77th United Nations General Assembly in New York.

SEforALL is an international organisation in partnership with the UN and government leaders, private sector, financial institutions, and philanthropies, to drive faster action towards the achievement of SDG 7: Affordable and Clean Energy, in line with the Paris Agreement on climate change.

The roundtable included ministers from a number of African States, the Executive Vice-President of the European Commission Frans Timmermans, and the UN Under-Secretary-General Cristina Duarte, and a number of development partners to discuss mechanisms for an equitable green transition within the continent.

Egypt launched its Integrated Sustainable Energy Strategy 2035, aiming to increase renewable energy by 42 per cent by 2035 and limit the impact of climate change, the minister said.

During the global SEforALL Forum in Kigali in May this year, ministers and high-level representatives from the Democratic Republic of Congo, Ghana, Kenya, Malawi, Morocco, Nigeria, Rwanda, Senegal, Uganda, and Zimbabwe met to discuss the requirements for a just and equitable energy transition in Africa. This concluded with the Kigali Communique, which includes seven key principles to address development gaps and to put Africa on a pathway, aligned with the Paris Agreement on climate change and Net-Zero.

El-Mashaat said that the points in the aforementioned communique emphasise the common objective of all African countries in terms of a just, green transition and the expansion of sustainable energy sources.

The minister referred to government efforts in moving from pledges to implementation, through the launch of Egypt’s Country Platform for NWFE programme, a nexus of water, food and energy projects that falls within the National Climate Change Strategy 2050.

El-Mashaat also discussed the Sharm el-Sheikh Guidebook for Just Financing, which will be launched at COP27 to help close the climate finance gap.