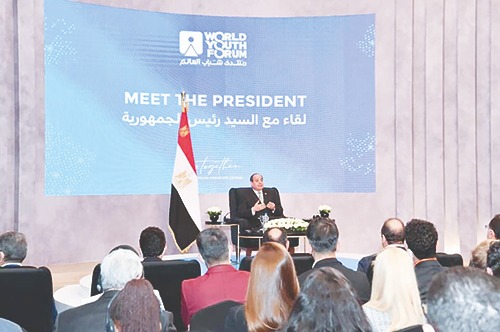 SHARM EL-SHEIKH – The participation of Egyptian scientists living in other countries in the fourth edition of the World Youth Forum (WYF), which concluded late on Thursday, stood out as one of the most important features of the four-day event, which was held in the Red Sea resort of Sharm el-Sheikh.

This participation enriched discussions during the forum and gave other participants the chance to listen to what some people termed as the ‘voice of science’.

Egyptian scientists, who travelled thousands of miles from the countries of their residence and work to Sharm el-Sheikh to participate in the forum, spoke during multiple sessions about a wide range of issues, providing discussions with a holistic perspective.

The Egyptian Gazette has succeeded in meeting some Egyptian scientists, living and working outside Egypt, during the forum.

Dr (Academic) Hani Sewilam, the academic director of the Department of Engineering Hydrology and the managing director of the UNESCO Chair of Hydrological Changes and Water Resources Management at the RWTH Aachen University in Germany, was a key speaker during the forum.

Sewilam highlighted the importance of creating links between decision-makers, experts and youths.
“Youths are usually the ones who implement discussions, including ones that are taken in such forums,” Sewilam said.

“In this forum, for example, we talk about modern technologies and the future plans. Young people will be the driving force behind the success of these plans.”

Sewilam believes the fourth edition of the WYF witnessed what he described as ‘remarkable progress’ in content.
He viewed the participation of youth and experts from Africa in the forum as indication to Egypt’s broad strategy to boost ties with fellow African states, especially those located within the Nile Basin.

“I saw the large number of people participating in this edition of the forum from all parts of the world,” Sewilam said. “This participation reflects confidence among the world’s youth in Egypt.”

Young people, he added, underwent tough times because of Covid-19.
“They come back with genuine zeal and towering ambitions,” he said.

He added that holding the forum at this juncture sends important messages to the world about the tourist, security, scientific, and artistic situation of the country.

Sewilam praised the organising committee of the forum for putting water security and climate change at the top of the agenda of the forum this year.

These issues, he said, are key pillars of sustainable development.
“Definitely, all the ideas discussed can be turned into tangible projects and initiatives,” Sewilam said.
Sewilam spoke during a plenary session on sustainable water security.

He underscored the importance of utilising modern technologies in water conservation and developing water productivity.

This, he said, would ensure food security for Egypt in the future.
Sewilam said more food can be produced with the smallest amount of water.

Egypt, he said, is badly in need of increasing its food production, given its growing population.

He called for training Egyptian youths in what he described as ‘water diplomacy’.

This training, Sewilam said, should start at the schools through the inclusion of water diplomacy as a subject in the school curricula.

“Students should understand the water issue, the Nile Basin and how Nile Basin countries are considered development partners,” he said.

Dr (Academic) Hani Azer, a global transport expert and ambassador of the Decent Life initiative, also enriched forum discussions with views that were admired by almost every one present.

He expressed happiness to participate in the fourth edition of the WYF.
“I can see a ray of hope in the eyes of the youth participating in this event,” Azer told The Gazette. “This shows that the political leadership in Egypt is on the right track.

He said his participation in the forum brought him even closer to his home country.

Azer expressed confidence in the abilities of Egyptian youth. He said Egyptian young people are capable of materialising their dreams.

“This forum sends a message to the world from Sharm El-Sheikh,” Azer said.
This message, he added, can be summed up in the three words ‘Dream’, ‘Act’ and ‘Hope’.

He noted that acquainting young people from all countries with the Decent Life presidential initiative is one most important results of the forum.

He described the initiative as the world’s most prominent in the field of human rights and development.
“The initiative sends an important message from the political leadership that it does not forget people in the countryside,” Azer said.

He said Germans did not believe the enormous size of the initiative’s goals when he talked to them about it in his capacity as the Decent Life Ambassador.

“They just cannot believe that an initiative is made to serve 60 million people,” Azer said.

He said a new digital technology, known as 3d painting, has already taken central stage in the fourth industrial revolution.

Attalah holds a chair in advanced materials processing at the School of Metallurgy and Materials, University of Birmingham.

Attalah praised the progress Egypt makes in digital transformation.
The Egyptian government, he said, moves ahead with digitising government services and launches many other projects.

“This helps facilitate people’s life,” Attalah told The Gazette.
He highlighted the importance of boosting the application of modern technologies in addition to improving education and research.

He said communication between Egyptian scientists and experts living outside Egypt and their home country is of paramount importance.

“Egypt has a great potential for its nationals who live in other countries,” Attalah said.
He added that Egypt is open to applying the technologies and the knowledge its scientists and experts acquire and master abroad.