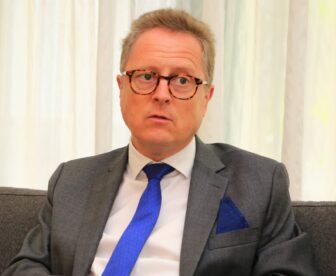 Germany will celebrate its National Reunification Day on October 3. This year’s celebration will also mark the 70th anniversary of establishing diplomatic relations with Egypt.
The German University Cairo is turning 20 these days. Cairo and Berlin also marked the 70th anniversary of founding the German-Arab Chamber of Commerce in Egypt this year.
All these anniversaries are indicative of longstanding relations between Egypt and Germany, something German Ambassador to Egypt Frank Hartmann says he is proud of.
“I am proud of having broad diversity in all spheres of our co-operation,” Ambassador Hartmann told the Egyptian Mail in an interview. 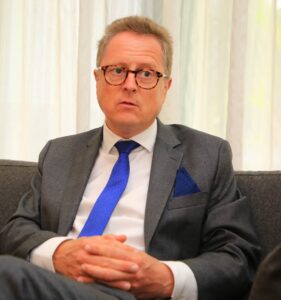 Cultural and educational co-operation between the two countries have been making one stride after another.
Ambassador Hartmann also takes pride in that German is the second widely spoken foreign language in Egypt.
Egypt has seven fully-fledged German schools, the second highest number of such schools in the world.
Together with other German cultural and scientific institutions in Egypt, the German universities constitute a wonderful chorus of growing cultural and educational relations between Cairo and Berlin.
Ambassador Hartmann described Egypt as a ‘strong partner’ of his country.
“It is an important regional player,” the German diplomat said.
He said meetings between German officials and Egyptian officials, including a meeting between Egyptian President Abdel Fattah El Sisi and the German chancellor this summer, had lent relations between Egypt and Germany a great momentum.
Ambassador Hartmann also referred to a recent meeting in New York on the margins of the United Nations General Assembly between Egyptian Foreign Minister Sameh Shoukry, and German Foreign Minister Annalena Baerbock with their Jordanian and French counterparts. “This so-called “Munich Group” is a well-established format dedicated to achieve progress in the Middle East Peace Process” he explained, “The current joint statement issued in NY stresses our commitment for peace and a two-state-solution. Together with Egypt we want to keep this issue on the international agenda.”
“We are also in close contact with Egypt on other global political developments, especially the Russian war of aggression in Ukraine,” Ambassador Hartmann said.
He described recent threats by Russian President Vladimir Putin and Foreign Minister Sergei Lavrov as ‘unbearable’.
Russia, he said, distorts realities, it is in fact a clear war of aggression on Ukraine’.
“Russia has to respect the territorial integrity, independence and self-determination of Ukraine,” the German ambassador said.
He warned against the possible negative implications of the war for countries like Egypt, especially with regards to food security.

Ambassador Hartmann added that German companies implemented a large number of infrastructure projects in Egypt in the past period, including in the fields of electricity, gas, and power grids and railways.
A huge deal was sealed recently, he said, with Germany multinational corporation Siemens, on the high-speed railway, the regional train and the cargo connection.
He noted that Germany considers itself a ‘key partner’ of Egypt in terms of technological modernisation.
“This shows our determination and contribution to Egypt’s modernisation and development,” he added.
Ambassador Hartmann said these deals need to be viewed within a broad economic picture at a time all countries are suffering from the consequences of the Russian war of aggression against Ukraine.
He said investment conditions in Egypt should still be improved, especially when it comes to small and medium-sized enterprises. “Transparency, rule of law and level playing field with state enterprises are essential”, he stressed.
However, he described co-operation prospects between Egypt and Germany in the field of renewable energy as ‘promising’.
These prospects, he said, do not only cover solar technology and wind power, but also new technologies, including the development of green hydrogen.
“Companies are ready and are already implementing some pilot projects,”
He revealed that some major projects would be unveiled during the 27th United Nations Climate Change Conference, widely known as COP27, in Sharm el-Sheikh this November.

Ambassador Hartmann described interest in renewable energy co-operation between Egypt and Germany as ‘strong’. A framework agreement on green hydrogen, he said, would hopefully be signed by the two sides in the second half of October.

He added that the export of liquefied natural gas is also a promising field of co-operation between the two countries.
Possible co-operation in this regard, he said, acquires special importance in the light of energy supply problems in Europe.
He said his country believes that Egypt can be a potential supplier of LNG energy.
Nonetheless, Ambassador Hartmann revealed that his country is turning even more to non-fossil energy sources in the medium and long run and will stick to the energy transition plan to double the share of renewable energy until 2030.
“So, our co-operation in green hydrogen is very essential technologically,” the German ambassador said, noting that this co-operation would cater to his country’s energy needs.
Meanwhile, Ambassador Hartmann said his country would honour its commitments to the fight against climate change, despite the current challenges of growing gas and energy prices.
He said Germany used to get over 50% of its gas from Russia.
“This has, however, come down to zero,” the ambassador said. “So we have to diversify and increase the share of renewables. The storage is sufficient and the government has made preparations to guarantee sufficient supply for the next winter and beyond.”
He added “Taken this crisis as a catalyst, Germany is even more determined to implement the energy transition to increase the share of renewable energy in its energy mix and to contribute to climate action.”
Renewable energy used to constitute 38% of Germany’s energy mix and the European country aspires to raise this to 80% by 2030.
Ambassador Hartmann described the fight against climate change as a ‘generational task’.
He said Germany’s COP 27 negotiators have been tasked with revising the implementation of the $100 billion commitment in climate financing, and facilitate together with Chile steps towards “loss and damage” financing.
He expected German Chancellor Olaf Scholz to attend the opening ceremony of COP27.
German Foreign Minister, Baerbock, he said, would also attend the conference and be Germany’s chief negotiator during the event.
Other German officials expected on the list of delegates in the conference include the minister of economic co-operation and the minister of environment.
He expected the German delegation to the conference to contain up to 130 people.
With regards to Germany’s activities during COP he highlighted that “the fight against climate change is not only an action for the government to take, but it is also a task for the civil society and the private sector”.
German tourism to Egypt, the ambassador said, has been rebounding, following a slump induced by Covid-19.
Around 600,000 German tourists visited Egypt in the first half of this year, according to the ambassador.
He expected as many as 1.2 million German tourists to visit the Arab country annually.
Ambassador Hartmann also dwelt on the launch of Egypt of its National Human Rights Strategy.
He said his country follows the steps being taken by Egypt in the field of human rights, but “the key will be steps towards full implementation of the strategy.”
Egypt and Germany, he said, are partners in their responsibility to maintain the international legal order and the UN system, which is called into question by the Russian war of aggression in Ukraine and its possible further escalation through expected illegal Russian annexations.
“We work together with all our friends and partners around the world to strengthen and maintain this international order,” Ambassador Hartmann said. 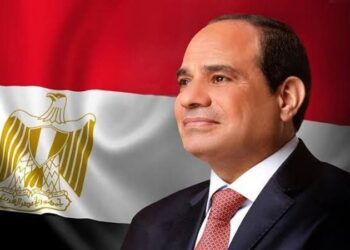 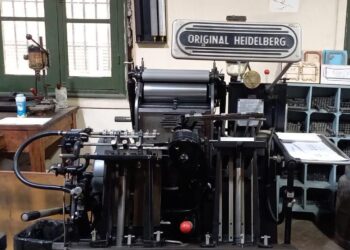