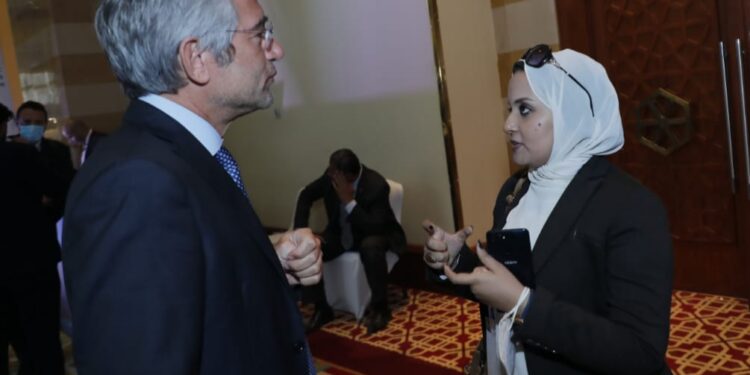 The Egyptian Gazette editor on Monday interviewing Lebanon’s Minister of Energy and Water Walid Fayyad on the sidelines of the 4th CWW.

Lebanon’s Minister of Energy and Water Walid Fayyad has affirmed his country’s support to Egypt’s water rights on the sidelines of the 4th Cairo Water Week (CWW) that started in Cairo on Sunday, under the auspices of Egyptian President Abdel Fattah El Sisi.

Fayyad also expressed pleasure to take part in the major event that realised dazzling success over the past three years.

“I am so glad to see great participation from African and the Arab countries,“  the minister told The Egyptian Gazette.

He added that the CWW offers an excellent opportunity to highlight the distinguished bilateral ties between Egypt and Lebanon.

Fayyad is due to meet ministers of electricity and oil during his current visit to discuss means of boosting bilateral co-operation, he said.

As for his meeting with Egypt’s Minister of Irrigation and Water Resources Mohamed Abdel-Aati, Fayyad said they had agreed to reactivate the Memorandum of Understanding signed between Egypt and Lebanon in 2010 for  co-operation in fields of research, management and exchange of expertise in the water sector.

Referring to development at home, the Lebanese minister said that the electricity crisis is “the largest challenge we face since a new government took over”. “The real problem in Lebanon is that we import all our needs of oil.”

On water resources in Lebanon, Fayyad stressed the need to design a systematic framework of managing the somehow good quantity of water, as huge amounts find their way into the sea.

The Lebanese minister also referred to President Abbdel Fattah El Sisi’s speech at the opening of the 4th CWW, hauling his bold stance, namely that water security is  a genuine right for every country. “Lebanon is committed to supporting Egypt’s water security,” he told the Gazette.