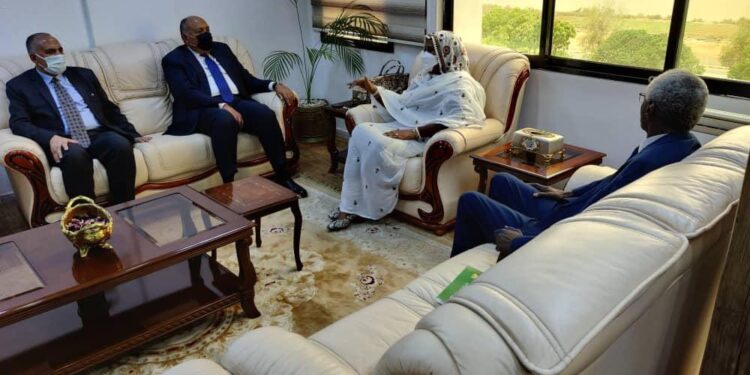 Egyptian and Sudanese foreign and water ministers are in agreement regarding dangers and dire consequences of the unilateral filling of Grand Ethiopian Renaissance Dam (GERD) and stressed the importance of coordinating efforts of the two countries at the regional, continental and international levels to push Ethiopia to negotiate seriously in good faith and with real political will in order to reach a comprehensive, fair and binding agreement on filling and operating the dam.

In a joint statement issued Wednesday the ministers highlighted the need to reach an agreement that is fair and legally binding on the filling and operation of the dam after the negotiations sponsored by the African Union reached a dead end due to Ethiopian hardline approach.

Egypt and Sudan also urged concerted international efforts to reach a settlement on the dam crisis.

The ministers also agreed on the need for coordination to protect security, peace and stability in the region and the African continent, which requires active intervention by the international community to ward off risks related to Ethiopia’s continued pursuit of its policy.

This policy seeks to impose a fait accompli on the downstream countries and shows the unilateral will that Ethiopia continues to follow, embodied in the announcement of its intention to fill the dam during the upcoming flood season without taking into account the interests of Egypt and Sudan.

The ministers also expressed deep concern about the potential effects and damages of filling and operating the dam unilaterally and without a legally binding agreement regulating the work of this huge dam on the rights and water interests of Sudan and Egypt.

The Egyptian and Sudanese sides called for a settlement to the GERD dispute in such a way that takes into consideration the interests of the three countries, the statement read.

They also stressed the importance of international efforts to reach a settlement of the dam crisis, taking into account the interests of the three countries and achieves their common interests.

The ministers expressed deep concern about the probable impacts and dangers on the Egyptian and Sudanese rights and water interests, in the case of the unilateral filling and operation of the GERD without a legally-binding deal.