Bilateral co-operation with Nile Basin countries is one of the main axes of the Egyptian foreign policy and is an essential part of the Egypt’s strategy to boost ties with those countries.

The availability of human resources as well as technical and institutional expertise are among the most important factors for the success of Egyptian bilateral co-operation activities.

Plan to develop ties with Africa

The Ministry of Water Resources and Irrigation has been working to develop bilateral relations with African countries.

It also uses its expertise and potentials to support this effort and to serve African countries in all areas related to water resources.

The ministry has also achieved several projects in roads in bilateral co-operation with African and the Nile Basin countries in general through the implementation of development projects that directly benefit the citizens of the Nile Basin.

The Egyptian government has embarked on a project to drill 30 groundwater wells to provide clean drinking water to citizens in remote areas.

Preparations are underway to implement the first phase of underground drinking water plants equipped with solar energy. The government is also carrying out a project to establish a forecasting centre for climate changes and rainfall.

Preparations for the establishment of the centre have already been completed. The aim is to enable the Democratic Republic of Congo to benefit from the Egyptian expertise in the field of forecasting. Egypt will also transfer this technology DRC. The forecasting centre was established and equipped with the latest hardware and software and it was officially opened in the presence of the several ministers in July 2021.

Egyptian officials paid an inspection visit to a plot of land with an area of 1,000 hectares affiliated to the Congolese Ministry of Environment and Sustainable Development in the Kinzuno region of the Batiki plateau in the Congolese capital of Kinshasa. The aim of the visit was to identify the requirements for its development using modern irrigation methods. The Ministry of Water Resources and Irrigation also prepared a feasibility study for the establishment of a hydroelectric infrastructure to enable the Congolese side to benefit from the Egyptian expertise and to provide them with technical support through sending the feasibility studies for the establishment of small multi-purpose hydroelectric units in which the proposed sites and technical specifications for their implementation are specified.

The Ministry of Water Resources and Irrigation organised around eight training courses, according to the need of the Congolese side, for around 116 trainees in the fields of integrated water resources management, geographic information systems, technical reports, water quality and in the field of the executive framework of the new water law in the Democratic Republic of the Congo.

A Congolese student was delegated to study in Egypt. He obtained his master’s degree in November 2020.

The Congolese Minister of Environment and Sustainable Development Eve Bazaiba Masudi visited Egypt during the period November 16-19, 2020 to discuss ways to enhance co-operation between the two countries. He also held meetings of the Joint Technical Advisory Committee.

The Egyptian Minister of Water Resources Mohamed and Irrigation Abdel Aati visited the Democratic Republic of the Congo during the period July 13-16, 2021 leading a high-profile delegation to discuss ways to strengthen bilateral co-operation between the two countries. He also attended the opening of Climate Prediction and Application Centre (ICPAC). 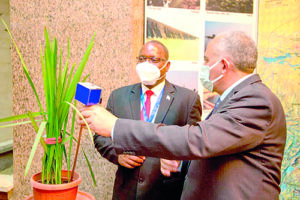 As part of co-operation on the long-term training courses, a student was sent to Cairo to study and obtain a doctoral degree. He completed his PhD in November 2020.

On the medium-term training courses, the Ethiopian government participated in the joint water resources diploma, which is held annually at Cairo University.

A number of training courses are being implemented in areas related to water resources and irrigation for nearly 31 trainees of Ethiopian technical staff in the fields of integrated water resources management and irrigation systems. The two countries co-operate in the field of research and development as Egypt provides technical support to Ethiopia in creating natural models and providing technical support for the establishment of a hydraulic research laboratory in Addis Ababa.

Burundian students and scholars are sent to Egypt to obtain diplomas in joint water resources from the Faculty of Engineering, Cairo University. Other diplomas are held annually at the National Water Research Centre.

A co-operation agreement was signed between Egypt and Burundi in the field of water resources and irrigation on March 24, 2021 to implement an integrated water resources management project.

This includes providing technical support regarding the preparation of a study on the establishment and maintenance of a network of private rainwater drains in cities and villages in Burundi, in addition to technical studies on resource management planning and development project of waterways in Burundi.

Egypt completed the drilling and equipping of 30 underground wells according to a memorandum of understanding signed with Tanzania in 2007 to provide drinking water in areas suffering from water scarcity.

Bilateral co-operation between the two countries also includes implementing 70 underground wells under a memorandum of understanding signed in 2009.

A total of 30 underground wells were established to provide drinking water to 5 districts (Sami, Mwanga, Kitito, Parayadi, Utelima) in the regions of Kilimanjaro, Manyaraand Simio, which suffer from water shortage.

Coordination is underway with Tanzania to strengthen bilateral co-operation in the field of constructing underground wells to provide clean drinking water to citizens as well as building rain harvest dams. 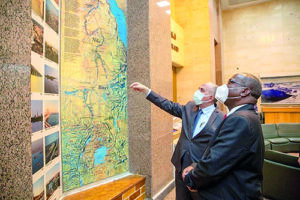