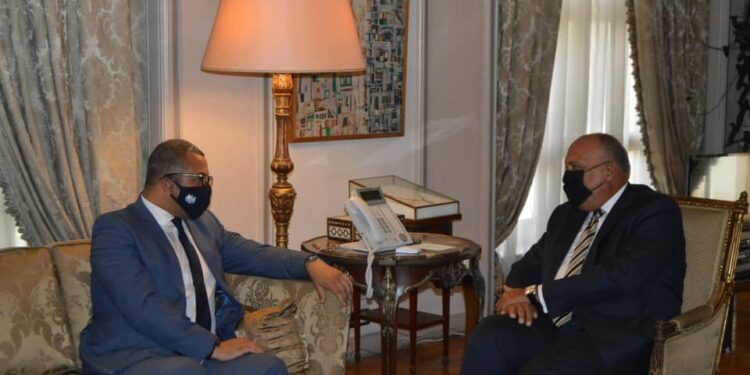 Foreign Minister Sameh Shoukri during his meeting yesterday with the visiting UK Minister of State for the Middle East and North Africa James Cleverly.

Egyptian Foreign Minister Sameh Shoukri stressed on Sunday the importance that Egypt attaches to hosting next year’s session of the Conference of Parties to the United Nations Framework Convention on Climate Change (COP27), as part of Egypt’s pioneering and aspiration to coordinate and strengthen international efforts to confront the phenomenon of climate change.

The two top officials discussed ways to advance bilateral relations between Egypt and the United Kingdom as well as regional and international issues of common concern.

Minister Shoukri expressed Egypt’s support for the efforts made by the United Kingdom to successfully host the twenty-sixth session of the Conference of Parties to the United Nations Framework Convention on Climate Change and the Summit of Heads of State and Government, both of which are scheduled to convene in Glasgow next month.

Egypt, FM Shoukri noted during the meeting, is looking forward to seeing the conference’s conclusions contributing to the advancement of the agenda for confronting climate change, including support for developing countries so that they can fulfill their commitments in accordance with the objectives of the Paris agreement.