Egypt keen on extending all possible assistance to Africa 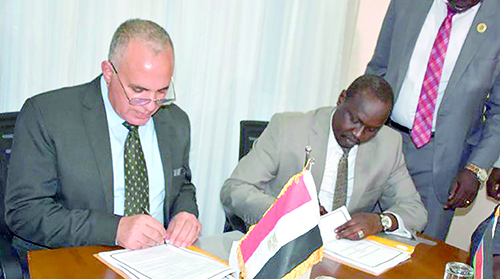 Egypt is always keen to support African countries across history through various co-operation projects as it has already established several dams, underground water stations and fisheries over the past few years to help fellow African countries.

Egypt enjoys close relations with African states in various fields to meet the needs of their peoples in accordance with directives by President Abdel Fattah El Sisi to extend all possible assistance to African brothers.

The Egyptian Ministry of Irrigation and Water Resources has started digging three solar-powered water wells in South Sudan as part of the second phase of water co-operation projects between the two African countries.

The three wells aim to provide water to the underground water plants at Kabu, Kabori and Rajaf villages in the west of the country, a statement released by the Ministry of Irrigation has said.

Another seven underground drinking water stations will be constructed at seven Sudanese outlying rural areas, with each station having a 100-metre-deep, well equipped with solar-power pumping system and a water tank with a capacity of 36 cubic metres, the statement said.

Each of the seven stations will provide drinking water to up to 2,000 residents of South Sudanese villages.

The first stage of this co-operation project included digging six underground wells in Juba, in addition to constructing river sidewalks to facilitate travel between main cities and villages in South Sudan.

The first stage also included installing a lifting unit to pump river water to population centres near the waterways in Wau city, in South Sudan, to provide clean drinking water to citizens, according to the Ministry of Irrigation’s statement, detailing water projects inthe African continent.

The ministry has also contributed to preparing technical and economic feasibility studies for the multi-purpose Wau Dam project in South Sudan.

The multi-purpose dam project aims to generate 10.40 megawatts of electricity. It also aims to provide drinking water to about 500,000 individuals, as well as the water needed for supplementary irrigation of about 30-40 thousand feddans.

The dam project will be constructed on Siwi River, one of the main branches of the Jur River in Southwestern Sudan, flowing through the Bahr el-Ghazal and Equatorial regions.

All technical and economic studies were completed and handed over to the South Sudanese side in a workshop held in the city of Wau in February 2015.

Igga’s visit to Egypt has witnessed the signing of several agreements to boost co-operation between the two countries.

The agreements included a memorandum of understanding signed by Irrigation Minister Mohamed Abdel Aati and his South Sudanese counterpart Manawa Peter on a study to reduce the risk of flooding in the Sudd swamp in South Sudan.

Abdel Aati said co-operation with the Nile Basin and African countries is one of the main axes in Egypt’s foreign policy.

Egypt is eager to establish several water projects that would directly benefit African countries through achieving sustainable development and helping raise the standard of living of citizens.

South Sudanese Minister of Irrigation Manawa Peter stressed that Egypt has human capabilities and technical and institutional expertise in irrigation and water resources.

Peter added that Egypt also co-operates with his country in accomplishing cleaning projects in the basins of Bahr el-Ghazal and Bahr al-Jabal Rivers as well as multipurpose water harvesting projects.

Egypt has already built flood barriers at the River Nile, according to the ministry’s statement, Minister Abdel Aati said.

He added that his ministry has provided training for a large number of South Sudanese human resources working in the irrigation sector.

More than 200 trainees from South Sudan have benefited from around 15 training courses in various fields of water resources management such as water quality analysis, methods for measuring water levels, geographic information systems and groundwater management.

Abdel Aati referred to Lake Victoria-Mediterranean Sea navigation line linking project that Egypt aspires to implement, as it will allow landlocked countries, including South Sudan, to have access to coasts through the link between Lake Victoria and the Mediterranean Sea.

This project, which is expected to be completed in 2024, aims to find sustainable means of transport to reduce poverty in the Nile Basin countries. To this effect, a grant of $650,000 was approved by the AfDB in August 2015 and feasibility studies started in October 2015.

Project to set up water plant in Lemon Mountain

The plant consists of a well lying at a depth of 100 metres, a reservoir with a capacity of 36 cubic metres, and a solar-energy-powered pump.

The plant is connected to public taps through pipes providing dwellers with water.

Meanwhile, a water elevation unit was set up in South Sudan in order to deliver river water to nearby residential areas.

A co-operation agreement to set up a project for developing modern irrigation systems at Marial Bai in South Sudan was signed during a visit to Egypt by the South Sudanese minister in September 2020.

The Arab Contractors Company is implementing the project.

As for digging wells and establishing underground water treatment plants, the breakdown is 180 in Kenya, 75 in Uganda, 30 in Tanzania, 10 in Sudan’s Darfur, and 6 in South Sudan.

In Uganda, the second phase of a flood prevention project is underway in Kasese town while three fisheries, and two river harbours have been accomplished.

Up to 100 non-Egyptian Africans attend training courses on irrigation and water management sector every year. That is in addition to those awarded scholarships to get master’s and PhD degrees in Egypt.

Egypt and Uganda are undertaking the fifth phase of combatting waterweeds in the Great Lakes.

It is also implementing Aquatic Weed Control Project in Uganda to remove the invasive water hyacinth, which spread on an area exceeding 100 feddans near Port Bell, and Owen Falls Dam after heavy rains affected Uganda and other Equatorial Plateau countries in a way that led to an unprecedented rise in water levels in Lake Victoria.

The project is executed in five phases, the first one started in March 1999 until April 2007.

The project had a positive impact on residents of villages and cities in Uganda as it helps in clearing the lakes from waterweeds.

This, in turn, contributed to the development of navigation and fisheries, as well as the beaches in major cities, enabling smooth movement of transport.

The move also helped protect the Owen Falls power station as well as the Port Bell and improved water and overall situation in the cities and villages near Lake Victoria.

The Egypt-Uganda water partnership is a model of co-operation, as five rainwater-harvesting tanks are implemented in this African country.