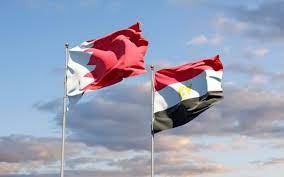 MANAMA – Bahraini Oil and Environment Minister and Special Envoy for Climate Affairs Mohammed bin Mubarak bin Daina has affirmed the effective role played by Egypt at the regional and international levels regarding the implementation of the United Nations Framework Convention on Climate Change and the Paris Agreement.

While receiving here Thursday Egyptian Ambassador to Bahrain Yasser Mohammed Ahmed Shaban, the minister lauded the deeply-rooted solid fraternal relations between Bahrain and Egypt, stressing the kingdom’s keenness to bolster its cooperation with Egypt in the energy and environmental fields, according to Bahrain News Agency (BNA).

The two sides reviewed ways to strengthen bilateral relations in the field of environment and renewable energy, as well as the two countries’ role in supporting international efforts to mitigate climate change effects.

They also discussed Egypt’s preparations to host the 27th session of the Conference of the States Parties to the United Nations Framework Convention on Climate Change (COP 27), set to take place in Sharm El-Sheikh in November 2022.

The Egyptian ambassador extended thanks and appreciation to the minister, voicing pride in the advanced level of co-operation between the two sisterly countries across various fields.

He underlined Egypt’s keenness to strengthen its ties with Bahrain for the best interests of their peoples.