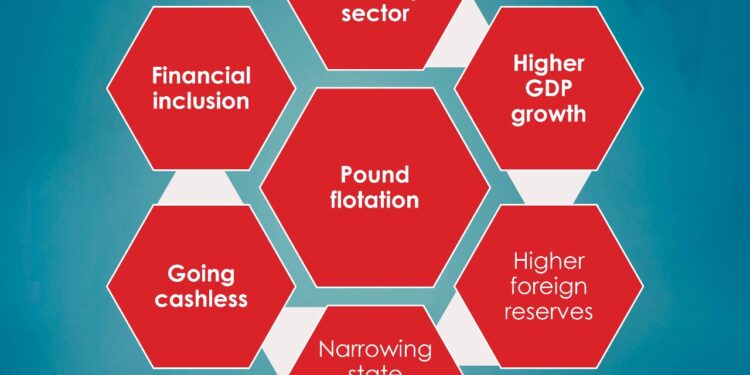 Paving the way for comprehensive economic reforms, the monetary and financial policymakers have joined forces since President El Sisi took the helm in 2014 to place Egypt’s economy among the fastest-growing in the Middle East and North Africa (MENA) and the whole world. 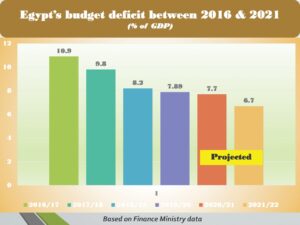 The President has led a smooth economic turnabout since the currency float on November 3, 2016, with a clear-cut, homegrown reform programme aimed at speeding up GDP growth and all-out sustainable development.

The Central Bank of Egypt (CBE) – the monetary regulator – and the Ministry of Finance have taken measures that smoothly put the economic reforms on track. The CBE embraced flexible policies to control liquidity rates and economic growth over the past seven years.

Pound flotation – On top of monetary measures taken in the past 50 years was allowing market forces – supply and demand – set the foreign exchange rate of the US dollar on the local market.

The pound flotation in November 2016 put an end to a parallel foreign exchange market, which had resulted in two prices of the greenback on the local market.

The liberalisation of the foreign exchange has boosted competitiveness of the business and investment climate in Egypt, rationalised imports and hiked up exports. 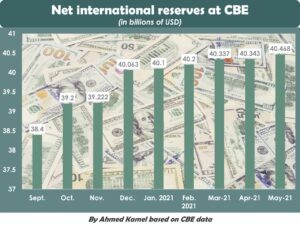 The ultimate objective of a well-designed monetary policy is to usher in financial stability. It should maintain a balance between combatting inflationary pressures and paving the way for investment inflows.

The foreign exchange liberalisation has opened the door wide for more measures to improve the domestic business climate through clear-cut legislations for investment, repatriation of profits, bankruptcy and dispute settlement.

In fact, the currency float has been a cornerstone step to close the gap between the then official and parallel market FX rates. The eradication of the dollar ‘black market’ was a direct result of the pound flotation.

Strong banking sector – The Egyptian banking sector has played a key role in maintaining the country’s financial stability over the past seven years.

It has cushioned the economy through a number of crises in recent years, especially the Covid-19 pandemic, which has taken its toll on the global economy in general. 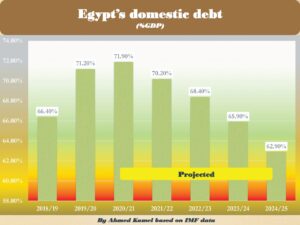 Egypt’s net international reserves (NIR) have eased the negative impacts of the coronavirus. Such reserves along with the banking sector’s liquidity have bolstered the local economy to withstand the Covid repercussions.

However, NIR fell to $36 billion in May 2020 on the back of the pandemic’s repercussions. The foreign reserves took a dip as a result of the Covid-19 pandemic and lockdown between March and end of June.

The foreign reserves have been above $40 billion since the beginning of the year, according to CBE data.

Easing rates – As part of measures to boost investment and push GDP growth ahead, the monetary policy has been resilient over the past seven years since President El Sisi appointed Tarek Amer as CBE Governor in 2015.

The CBE’s Monetary Policy Committee (MPC) lifted interest rates after the currency float in November 2016. The drive was aimed at strengthening the Egyptian pound versus the US dollar and combat inflationary pressures.

However, the MPC started a gradual easing of monetary policy in February 2019 to invigorate investment and boost economic growth. Lower rates are aimed at easing pressures on the local banks to offer competitive credit to the private sector. Decreased overnight rates slash the cost of money, as banks pay lower yields on deposits.

In 2017, President El Sisi launched the Supreme Council for Payments to boost the nation’s cashless and e-payment solutions. The entity has minimised use of cash in a country which used to heavily rely on banknotes in everyday transactions.

In addition to saving and current accounts, the local banks have been expanding cashless methods, which are becoming more and more popular as a safe alternative compared to banknotes and coins.

From an economic perspective, financial inclusion contributes to properly facing a number of challenges, i.e. poverty and unemployment in a bid to accelerate sustainable development. It also contributes to job creation as well as the mitigating of economic and financial fluctuations. 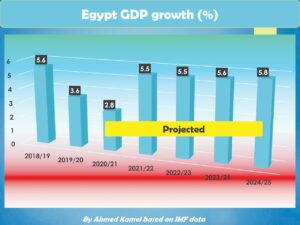 Moreover, as part of measures to boost cashless transactions on the local market, the CBE has set up regulations for the issuance of electronic money units by banks.

The CBE has set up regulations for providing digital lending and savings services through mobile phone wallets. It has taken a slew of measures to boost e-payment services since the pandemic hit the global economy a year ago.

In September 2020, the CBE launched an e-payment initiative to boost digital payment solutions to minimise dependence on cash in daily transactions. The objective is to speed up a smooth transformation into a digital economy as well as the expansion of e-payment systems.

The local banking industry has been upgrading its mobile services through the provision of a wide range of applications, drawing on the nation’s growing Internet users.

On the financial level, the state has realised landmark achievement such as narrowing the trade balance deficit, slashing state budget deficit and accelerating GDP growth rates.

Policy coordination – The integration of the monetary and fiscal policies is a must to speed up economic growth, close the gap in Egypt’s finances and achieve a sustainable development in the long run.

The monetary policy, set by the central bank, and the financial plans outlined by the government, should work together to ensure fiscal stability and curb inflationary pressures.

GDP growth – The GDP is expected to reach LE6.4 trillion ($410 billion) in the fiscal 2020/21 ending June 30. The GDP has been expanding since 2014 thanks to economic and fiscal reforms pioneered by President El Sisi.

Prior to the pandemic, Egypt was one of the fastest growing emerging markets, having achieved macroeconomic stabilisation after a successful economic reform programme.

However, Egypt has maintained a positive growth around 3.6 per cent of GDP despite the pandemic. Most world countries posted near-zero growth. Some economies registered negative growth rates in 2020.

Despite the pandemic’s negative impacts, the state revenues to GDP ratio rose to 18.4 per cent in the fiscal year 2019/20, up from 17.9 per cent a year earlier, data from the Cabinet’s media centre showed.

From a macroeconomic perspective, this is a breakthrough despite the sharp drop in revenues from tourism on the back of the pandemic. The public debt to GDP ratio reached as high as 108 per cent in June 2017.

The decline in debt-to-GDP ratio resulted from the narrowing deficit in the state budget and higher GDP.

The state budget deficit has taken a downtrend since Egypt launched its economic reform program in November 2016. The budget deficit stood at 12.5 per cent of GDP in the fiscal year 2015/16, according to Finance Ministry data.

For decades, budget deficits have been chronic symptoms of Egypt’s economy. In the fiscal year 1987/1988, the budget deficit rose to an historic record high of 33.5 per cent of GDP.

Structural reforms – Under the leadership of President El Sisi, the government will continue the economic reform programme in its second phase, which will focus on the economy’s structure. The new set of reforms come in line with Egypt’s Vision 2030.

The boosting of the private sector along with the green economy and environment-friendly projects will be the core of these structural reforms. Industrialisation and the bolstering the attractiveness of the nation’s investment climate will be top priorities as well.

In the first phase of reforms, the government in collaboration with the CBE have carried out a raft of financial and monetary measures since November 2016 to reform the nation’s economy. The economic reforms included the currency float (on November 3, 2016), slashing the subsidy bill, implementation of a value-added tax (VAT) system, new legislations for investment and the civil service.

Tax automation – In a bid to overhaul the nation’s tax system, under the leadership of President El Sisi, the government has launched a national project for tax automation and digitisation to facilitate procedures for investors.

It is expected to bring about a qualitative leap for the Egyptian tax system and place it among the advanced countries in the world.

New customs mechanism – As part of financial reforms, a new customs law has been enacted to introduce a state-of-the-art warehousing system at Egypt’s seaports and gateways.

For the first time, the new law has ushered in an electronic system to link the Egypt’s seaports and the Customs Authority. It is based on a one-stop shop and fully-electronic system without any paperwork.

It has also set up a mechanism to know in advance all shipments coming into the country via seaports.

The mechanism includes a follow-up system for tougher control over all imports. The mechanism has put an end to all obstacles facing exporters and importers. Importers will inquire about the customs duties in advance and also pay in instalments. 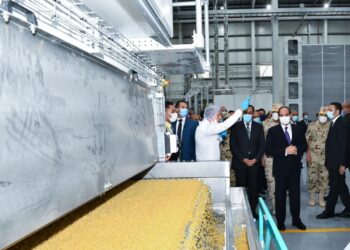 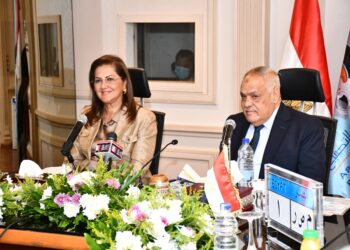 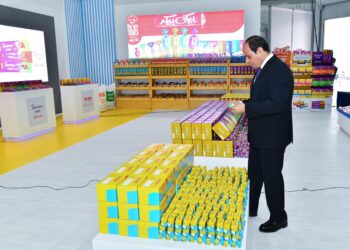