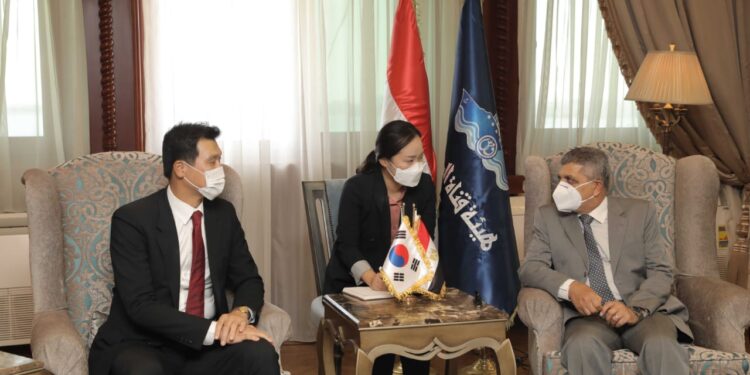 South Korean Ambassador in Cairo Hong Jin-wook visited the Suez Canal Authority (SCA) Wednesday as part of a tour that took him to Port Said and Ismailia.

During his meeting with SCA chairman Osama Rabie, Ambassador Hong stressed the importance of the Suez Canal, noting that foreign trade accounts for a large share in South Korea’s economy for which they rely mainly on maritime transport.

He said that following the giant vessel grounding in the Suez Canal in March, the South Korean government formed an emergency response system to follow up the incident developments.

Ambassador Hong hailed efforts by President Sisi and Chairman Rabie in quickly resolving the crisis, requesting the continuous support from the SCA to ensure safe navigation for South Korean vessels through the Canal in the future.

Rabie pointed out that the Suez Canal is the safest and shortest maritime route in the world with excellent services.

He said that after the stranded vessel incident, maritime specialists expected that it will take over three months to normalise navigation in the canal. However, the SCA managed to bring shipping back to normal quickly thanks to its people’s active and tireless efforts.

Rabie noted the ongoing expansion plans in the Suez Canal which will help ensure a smoother passage of vessels through the Canal.

Ambassador Hong said that South Korean companies can play a bigger role to strengthen the competitiveness of the Suez Canal.

The Korean envoy also suggested establishing a direct contact line between the South Korean Embassy and the SCA for regular communication and strengthening cooperation.

Rabie welcomed the proposal, adding that there are great avenues for cooperation between the two countries related to the Suez Canal.

The ambassador said that he was looking forward to increasing investment projects in the canal cities.

Beshara said that Ismailia enjoys a special position in Egypt with well-established infrastructure and roads network.

He voiced hope for more cooperation with South Korea in manufacturing and agriculture.

Ambassador Hong requested support for this project which will contribute to increase Egypt’s export to neighboring countries. Ambassador asked for the governor’s support to encourage more Korean companies to advance into Port Said governorate, especially by providing infrastructure that will smooth the companies’ business activities and operation.

For his part, the Governor briefed Ambassador on the current state of manufacturing in Port Said, expressing hope that more Korean Companies invest in the governorate. He added that he would make every effort to support Korean companies including building necessary infrastructure.

Ambassador said that Korea and Port Said shares similar experiences of achieving rapid growth and rebuilding itself from ruins of the Korean War and Middle East War, respectively. He said that Port Said has geographical advantage linking the two continents Africa and Asia. Ambassador said that based on the close ties between the two countries, he hopes for enhancing people to people exchange.

Ambassador Hong also visited the Suez Canal Special Economic Zone and toured the manufacturing facilities in the East Port Said industrial zone, where he discussed cooperation plans between the two countries with relevant officials and investment opportunities for Korean companies in the Zone.